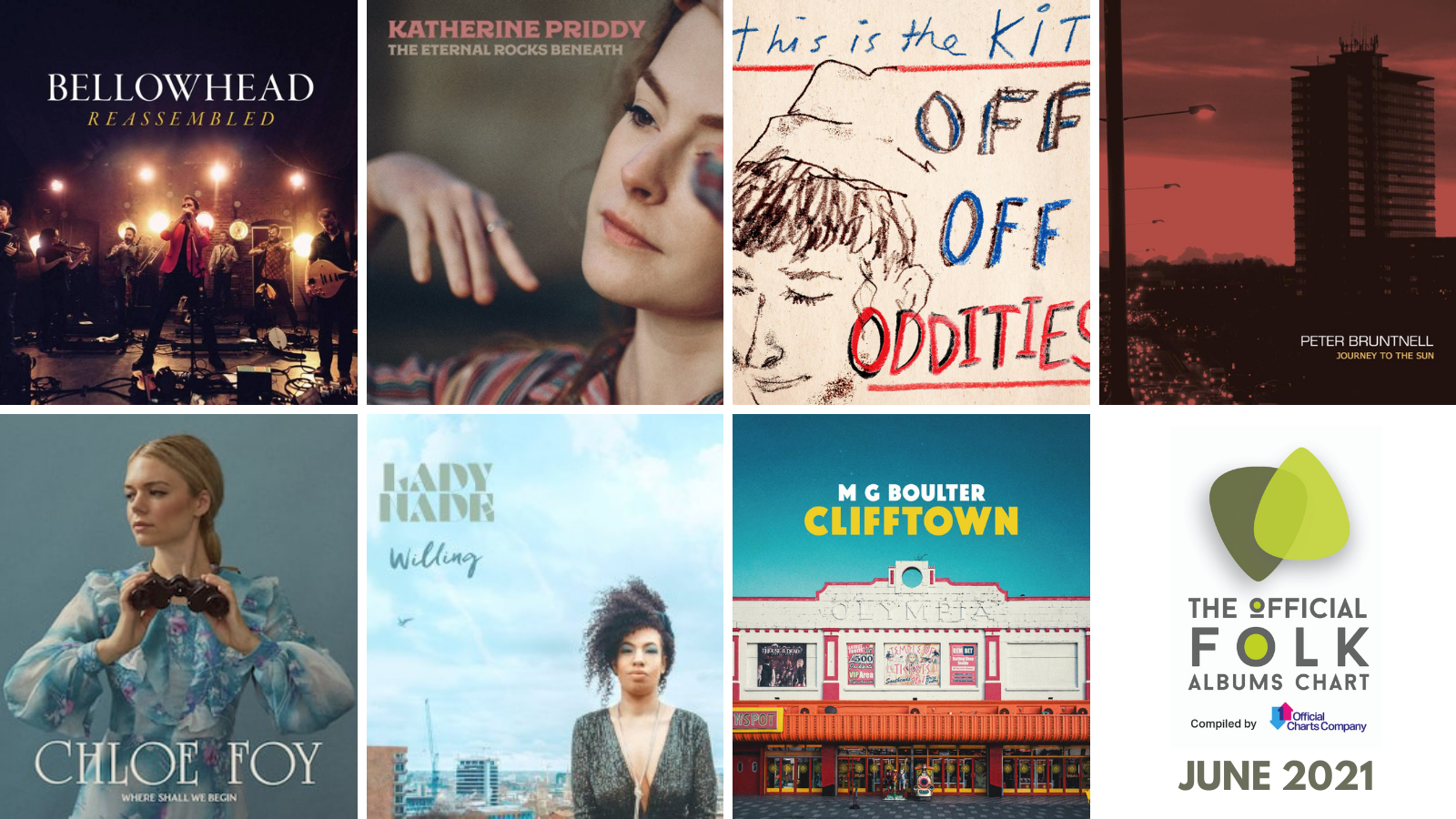 Today, the Official Charts Company in partnership with English Folk Expo reveal the Top 40 best-selling and most streamed folk albums released in the JUNE reporting period.

The chart is announced to the public at 7pm BST as part of the Official Folk Albums Chart Show presented by Folk on Foot via their YouTube channel and podcast feed.

Seven brand new recordings have entered the Folk Album Charts this month and of particular significance and delight are the three releases, including two debuts, that come from artists that have participated in English Folk Expo’s Artist Mentoring Programme, an initiative that provides support to emerging artists. The success of these artists demonstrates clearly, that training, knowledge and mentoring does work when combined with incredible creative talent.

But firstly, to the folk juggernaut, Bellowhead. In December 2020, to the delight of their army of fans, they reassembled for a one-off worldwide concert stream after calling it a day in 2016, 12 years after their formation. The concert, broadcast under extraordinary conditions during the pandemic, marked the 10th anniversary of their 3rd album Hedonism, the highest-selling independently-released traditional folk album of all time and sold over 10,000 tickets. It comes as no surprise then, that Reassembled (Hudson), the live recording of that broadcast takes the top spot at No.1. Capturing the joy and excitement of their blistering live shows that fuses folk, funk, rock and world while harnessing the mystery of ancient musical traditions, ‘Reassembled’ features a host of Bellowhead favourites.

Straight in at No.2 is The Eternal Rocks Beneath (Navigator), the debut release from singer-songwriter Katherine Priddy, an artist currently participating in EFEx’s Artist Mentoring Programme. With extraordinary media attention, Priddy is fast becoming this year’s acoustic music’s success story. Her enchanting songs reference themes of childhood and distant memories as well as celebrating her life-long love affair with literature and poetry. With her haunting vocals, rich harmonies, distinctive finger picking guitar style, her original songs are delivered with maturity and depth; at times tender, at times carrying a darker edge. Sweeping strings, raw electric guitar and fiddle enhance Priddy’s command of melody and lyricism providing the perfect backdrop for the feelings of nostalgia and timelessness that underpin the record.

It’s been eight years since singer-songwriter Chloe Foy released her debut single with follow up releases bringing huge streaming success, and almost four since she participated in the very first Artist Mentoring Programme. Her debut album, Where Shall We Begin (Chloe Foy Music) is a body of work from an artist who took her time to find her own voice and “get it right”. Landing at the No.24 slot, the collection of songs were written during a time when Foy was dealing with the loss of her father and makes for an emotional and intimate listen. Foy is a superb songwriter. Her reflective songs are laced with subtle melodies and clever nuances that befits a pure voice that is as disquieting as it sweet and ethereal.

Without doubt, Lady Nade has one of Britain’s most distinctive, memorable and unique voices. Fresh from graduating from the 2020 Artist Mentoring Programme, she releases her sophomore album, Willing (Lady Nade) in at No.25.  Blending the full gamut of roots music styles – blues, Americana country , folk and soul, Lady Nade has a soothing, tender, velveteen voice, and a knack for creating memorable melodies. The Bristol-based singer-songwriter began writing poems and songs as a healing from grief and continues to use authentic and powerful narratives. ‘Willing’ is a message of acceptance, loyalty and friendship and champions the positive connection between music, well-being and the importance of equality and diversity within the arts.

At No. 33 is Clifftown (Hudson),the third solo albumfrom Essex-born and based singer-songwriter-musician, M G Boulter. Clifftown – a fictional town resembling Boulter’s hometown of Southend – charts the characters, personal histories and stories of growing up in English seaside suburbia. Creating vignettes of ordinary life glimpsed through fairground grease and mindless 9 to 5 jobs, songs are both observant and affecting. Working again with producer Andy Bell  and a roll call of musicians that include Pete Flood and Sam Sweeney (Bellowhead), Lucy Farrell (The Furrow Collective) and Richard Warren (Spiritualized), Clifftown brims with intoxicating melodies and gorgeous sounds featuring banjo, viola, guitar, mandolin and lap and pedal steel guitars – much of it performed by Boulter himself. Clifftown is an exquisite and life-affirming exploration of modern suburbia and the British seaside by one of the UK’s finest songwriting talents.

Kates Stables’ This is the Kit releases Off Off Oddities (Rough Trade) in at No. 18, joining ‘Off Off On’ (released Oct 2020), as her 2nd chart position. Described by Kate as a collection of the inevitable “bits and bobs that don’t get used” on an album, it includes instrumental versions of some of the songs, alternate versions and exclusive cuts. An essential companion piece.

Consistently lauded by critics for his rich songcraft, singer-songwriter-musician Peter Bruntnell releases Journey to the Sun (Cadiz) landing at No.21 . The album sees him playing the majority of instruments including, for the first time, synth and bouzouki, providing the backdrop to his singular, raspy voice. The alt-country-Americana-pop-tinged collection of reflective songs centre around death, longing, leaving & regret told with decidedly striking lyrics.