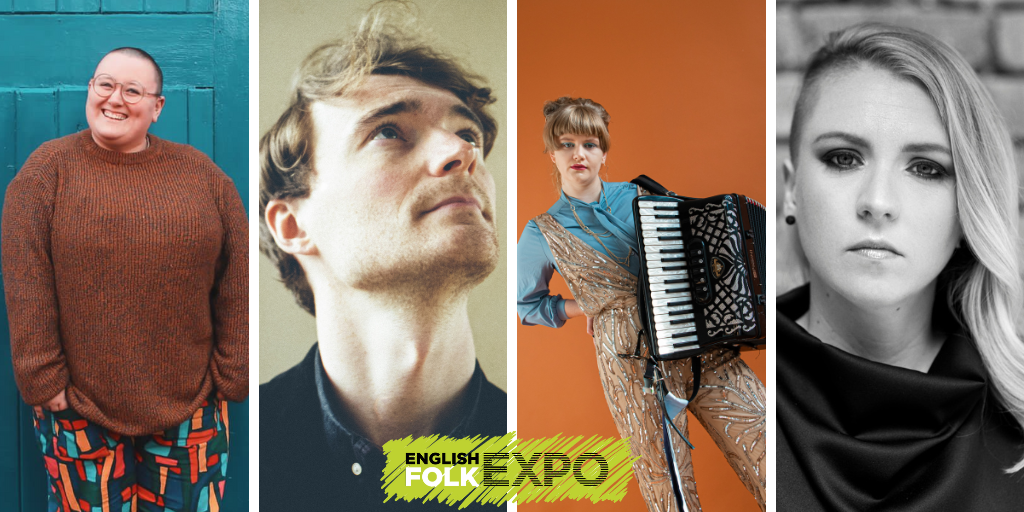 Given the explosion of interest in live music, it’s more important than ever for musicians to professionalise, understand more about the industry and to prepare for international export. To this end, English Folk Expo offers an artist mentoring programme, giving carefully selected artists from the folk, roots and acoustic music genres a tailored and extensive training opportunity.

Over 12 months, participants on the English Folk Expo Artist Mentoring Programme will study selected areas of the music industry, developing their awareness, widening networks and creating a strategy tailored to suit their own business needs. By the end of the course, participants will have a firm understanding of the roles and responsibilities of different parts of the sector, developed new contacts and networks within the industry and have a clear road map for them to follow in the next stage of their careers.

Watch an interview with Chloe Foy, one of the participants in the 2018 / 19 programme HERE

This year, we have selected four participants:

Heather Ferrier is an accordionist, clog dancer and composer from Stockport, now based in the North East. 2022 has seen Heather release her debut solo EP ‘From the Ashes’. This concept EP, which gives an insight into Heather’s internal life during the first Covid-19 lockdown, intertwines virtuosic accordion compositions with lush electronic soundscapes. This year also sees Ferrier expanding the scope of her solo sound, joining forces with guitarist Alasdair Paul (Pons Aelius) and drummer Adam Stapleford (Taupe). In their forthcoming EP the trio have created music that is an explosion of groove and melody, embellishing Ferrier’s signature alt-folk style. The combination of Ferrier, Paul and Stapleford’s melting pot of influences and cross-genre collaborations transcends the boundaries of contemporary instrumental folk music, using Ferrier’s distinctive compositions as a basis for emotive and dynamic arrangements.

Having been honing his song-writing craft and live performances over the past decade, George Boomsma has been quietly gaining some well-earned attention and acclaim. Based in Northallerton, North Yorkshire, George’s pure voice and tumbling guitar make for a bewitching combination – warm and melancholy, melodic yet powerful, he exhibits a maturity and poetic lyricism that have left audiences around the country entranced. He has been invited to play alongside many impressive and established artists such as Richard Thompson, Gaby Moreno, Kathryn Williams, Katherine Priddy, The Travelling Band, Chloe Foy, Sam Kelly, Jefferson Hamer, Emma Langford and Martha Tilston.

Maddie Morris was the recipient of the BBC Radio 2 young folk award in 2019, and is an exciting up-and coming folk musician who uses both traditional and contemporary folk song to tackle issues of social inequality.

Maddie’s music is powerful, poetic, and insightful as she uses stories from the past and present to evoke thought about contemporary social issues.

Hannah Scott draws much of the inspiration for her music from her affinity with Italy. A year living and working on an olive press in rural Tuscany in her late teens provided the backdrop to her early work and she has found her musical home with creative partner, writer-producer and multi-instrumentalist Stefano Della Casa, who she met in London but may well have met in Italy years earlier when passing through the train station he was working in!

Hannah performs contemporary folk music and is building a loyal following thanks to her distinctive voice, powerful melodies and thought-provoking lyrics which leave a lasting impression on her audiences. Her latest album “Drawn To Darkness” was funded by Help Musicians UK and a Kickstarter campaign which reached more than double the initial target.

This programme is only possible with the support of a strong range of partner organisations.

PRS Foundation’s The Open Fund for Organisations – Thanks to the PRS Foundation for supporting this project through their Open Fund. It would not be possible without this funding.
https://prsfoundation.com/

FOCUS Wales – We’re grateful to the team at FOCUS Wales for enabling the artists to participate in their conference as well as showcase to delegates in Wrexham this May.
http://www.focuswales.com/

Americana Music Association UK – Participants will also attend the annual AmericanaFest UK, three day Conference and Showcase Festival to network within the industry, attend panel discussions and see a showcase from the point of view of a delegate first hand.
https://theamauk.org/

Featured Artists Coalition – Participants will start the programme by taking part in the FAC Artist:Entrepreneur Day in Manchester.
https://www.thefac.org/