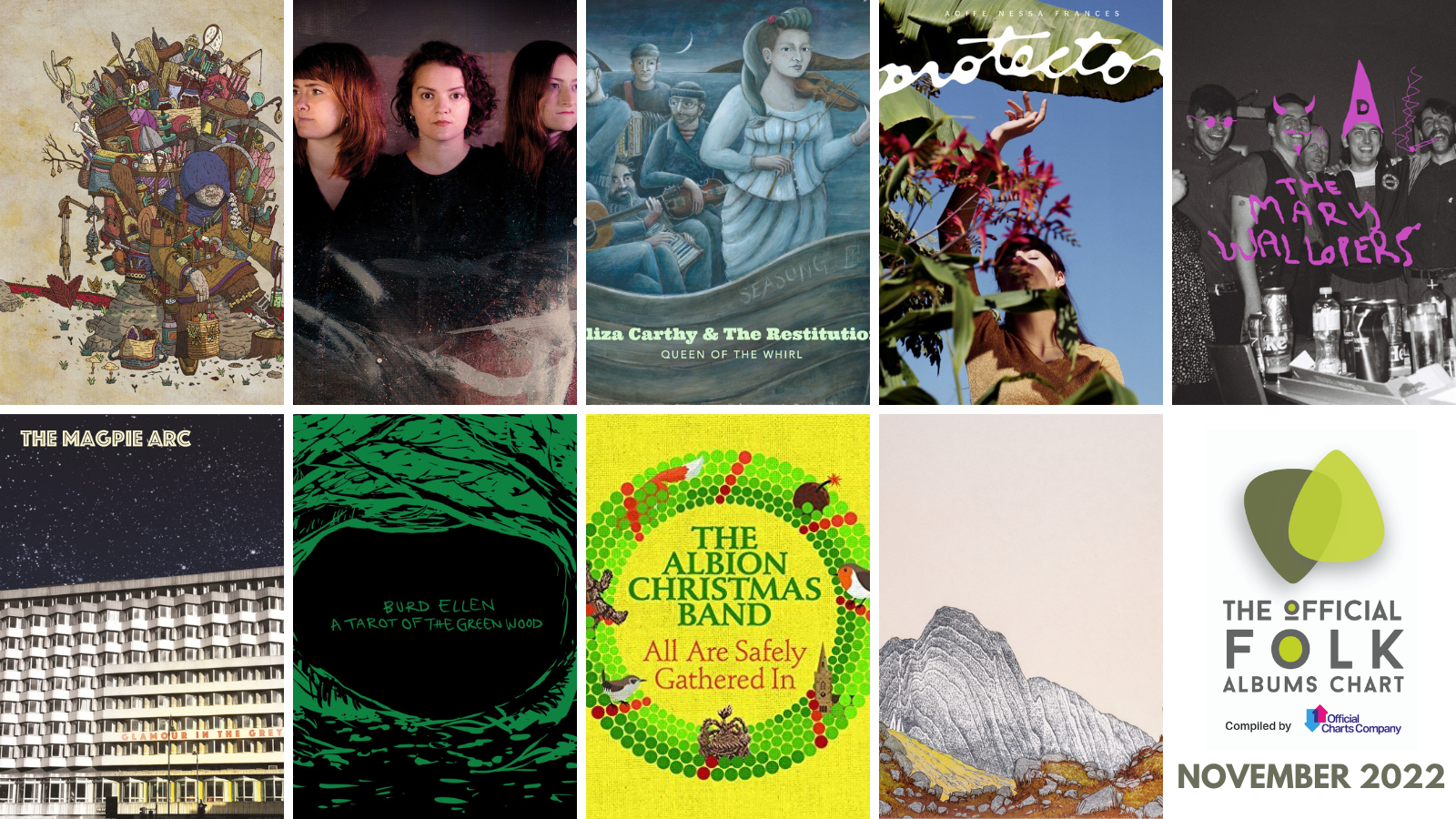 On Tuesday 6 December the Official Charts Company in partnership with English Folk Expo reveal the Top 40 best-selling and most streamed UK folk albums released in the November reporting period. It is announced to the public at 7pm GMT as part of the  Official Folk Albums Chart Show  presented by Folk on Foot via their YouTube channel.

There are 9 new entries this month with 6 of them in the Top 10 and 3 debut recordings.

The boundary-pushing Geordie singer-guitarist Richard Dawson lands straight in at No.1 with The Ruby Chord (Weird World), the final part of a trilogy that began with the pre-medieval world of ‘Peasant’ (2017) and ‘2020’ (2019) with this album concluding in a fantastical, sinister sci-fi future. Ethical boundaries have evaporated, human society has collapsed and morphed into something distinctly less solid. The ambitions opening track, ‘The Hermit’ is a simmering, sprawling 41-minute mood piece acting as a gateway to the album that bears Dawson’s uniquely unsettling, off-kilter, esoteric  brand of English folk.

At No.3 is Tender (Lady Maisery) from Lady Maisery – the combined talents of three of the most accomplished modern folk artists, Hazel Askew, Hannah James and Rowan Rheingans. Comprising original songs as well as  personal interpretations of other works, songs examine femaleness from many sides.  In both sound and song, it is an affecting, powerful album radically different to their previous recordings. Richly textured, with meticulous arrangements of electric guitar and instruments that include harp, harmonium, banjo, and accordion, it bears voices that unite in strength, harmony and message.

One of folk’s great innovators, Eliza Carthy celebrates thirty years as a professional musician with Queen Of The Whirl (Hem Hem), straight in at No.6. Loved by staunch traditionalists and iconoclasts alike, Eliza’s music effortlessly crosses boundaries of genre and style. The collection includes some of her most loved career-spanning songs as chosen by her fans on Twitter. It’s a surprisingly diverse mix with each song reworked and re-recorded with her band The Restitution resulting in a unified sound. At its heart of course, is Eliza’s powerful, nuanced voice and fiercely beautiful fiddle playing.

Protector (Partisan) from Irish psych-folk singer-songwriter Aoife Nessa Frances  enters at No.7. Having fled the city of Dublin for the rugged west coast of Ireland, Aoife’s 8-song collection of beautifully languid songs reflects her feelings of disconnection, self-preservation and the power of nature and family to restore and find peace.  Her magnificent song writing and rich but soft, floaty vocals permeates songs of delicate instrumentation that are often juxtaposed by gritty guitars and synths.

The Mary Wallopers (BC Recordings) is the first debut recording to enter this month’s chart, and arrives in at No. 8. Led by Dundalk-based brothers Charles and Andrew Hendy with Seán McKenna, the group travelled the length and breadth of Ireland singing and collecting traditional Irish songs and this self-titled album  is the result. Exuding raw energy, powerful guitar chords and riotous choruses, the collection of 11 sing-along songs are filled with warmth and intimacy bringing excitement to traditional ballad singing.

A Tarot Of The Green Wood (Mavis Recordings) from Glasgow-based experimental folk duo, Burd Ellen is at No.17.Together,  Debbie Armour and Gayle Brogan have carved out a sonically adventurous niche but one that is informed by a deep love and respect for traditional song. Combining incessant buzzing drones, electronic sound washes and distinctive vocals, their sound is hypnotic, stark and uneasy. The album explores the idea of parallels between the interpretation of traditional song and the imagery and hidden meaning of the Major Arcana in tarot.  It’s a moving and intense listen.

Acclaimed for their seasonal shows which have been touring for over 20 years, The Albion Christmas Band release their first album in 8 years, All Are Safely Gathered In (Talking Elephant) which takes the No.24 spot. Led by the co-founders of Fairport Convention, the band present a spellbinding collection of traditional seasonal songs, inspired arrangements of contemporary songs alongside new originals and spoken word. All shades of emotion and aspects of the season are on display from the humorous to melancholy and celebratory to sadness.

The final debut recording to enter this month’s chart comes from the Anglo-Scottish duo, Janice Burns & Jon Doran who release No More The Green Hills (Wylam), in at No.31. Saluting their roots with contemporary arrangements of Scottish and English traditional folk songs alongside Irish ballads, the pair explore man’s relationship with nature alongside themes of love and loss. Understated yet powerful, by turns fragile and poignant, spirited and soulful, dreamy and direct, the album features two strong, beguiling, clear voices enviable harmonies and multi-instrumental flair.

Janice and Jon also represent England in this year’s Global Music Match (founded by English Folk Expo amongst others) in the world-first cross-border online artist collaboration.