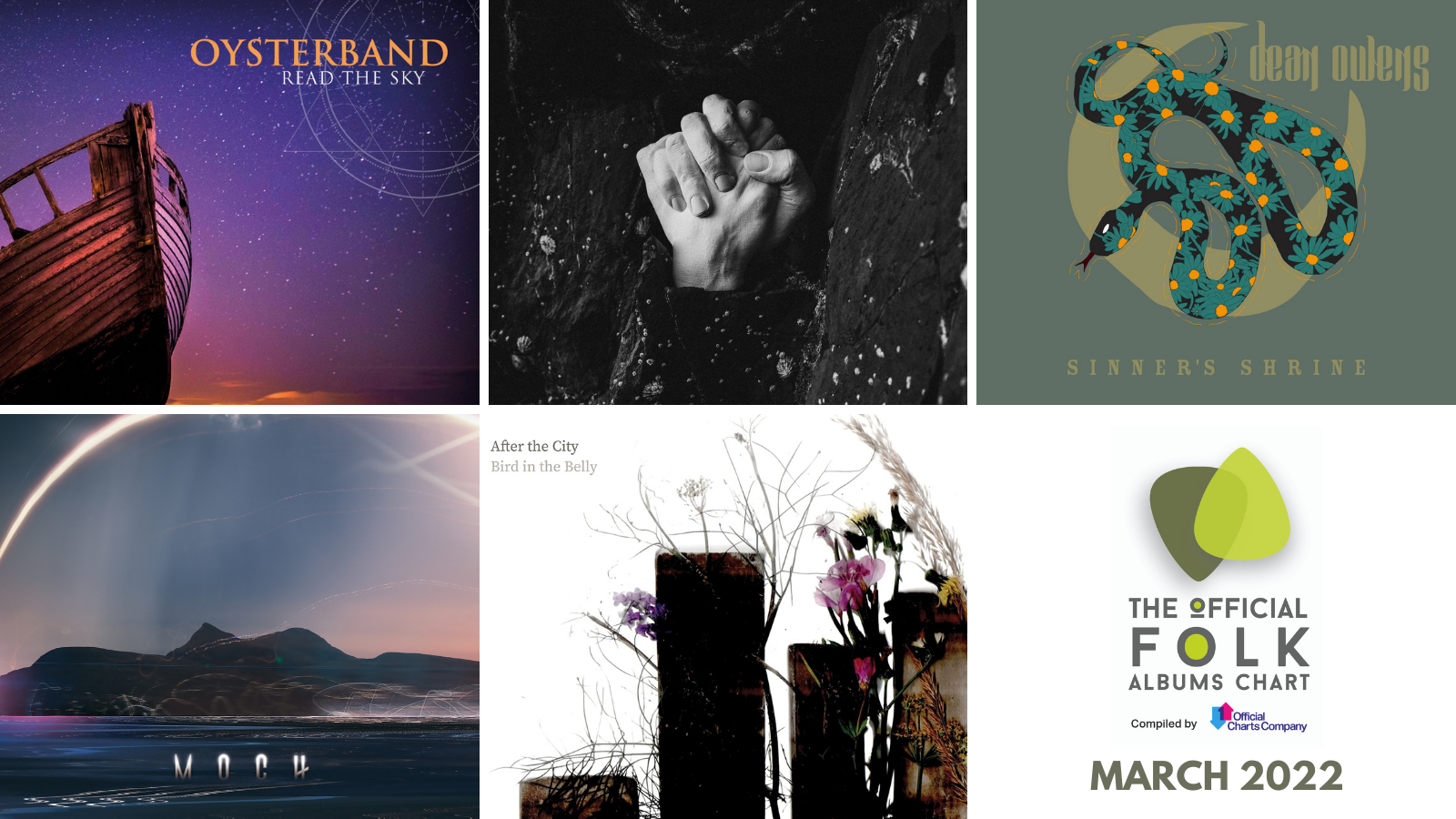 On Tuesday 5 April the Official Charts Company in partnership with English Folk Expo reveal the Top 40 best-selling and most streamed folk albums released in the MARCH reporting period. The chart is first announced to the public at 7pm GMT as part of the Official Folk Albums Chart Show presented by Folk on Foot via their YouTube channel.

Five new releases have entered the Top 40 chart this month.

Straight in at No.1 is Read The Sky (Running Man), the 12th studio recording from folk-rock legends, Oysterband. Despite an 8-year gap since their last recording, the collection displays an undiminished creative energy and a storytelling that has become more personal and more emotionally truthful. In writing about the world they experience, Oysterband’s politically-alert songs have become more implicit and more urgently green, both in anger and in elegy. Their combination of guitars, keys and drums with melodeon, violin, cello and mandolin with forceful vocals makes for a rhythmic sound that packs a punch. Despite some hard-hitting themes, their brand of rootsy folk-rock and rousing choruses is uplifting and joyous.

The second and final Top 20 entry comes from Samana, the pairing of Rebecca Rose Harris and Franklin Mockett. Their sophomore release, All In One Breath (Music for Heroes) lands at No.6. Recordedwhen stranded in the French countryside during the lockdown of 2020, songs weave between various musical styles from progressive folk to an experimental, transcendental take on soul, blues, and rock. The album documents their beautiful surroundings and the silence, solitude and the boundless sense of the destruction of the time. Many of the songs are improvisations with the album’s shifting sonic palette combining squalling, twangy guitars with meditative and understated parts. Vocals are sombre and compositions hypnotic, often dark with a sound that is raw, beautifully alive and uniquely striking.

On Sinners Shrine (Wrasse) in at No.23, Scottish singer-songwriter Dean Owens surrenders to the intoxicating sounds of America’s desert states, travelling to Arizona to record withmusicians from iconic Latin rockers, Calexico. While still rooted in his signature Americana-alt country sound, the album sees him adding desert noir and Latin notes to his musical palette. Stories of love and lust, sinners and saints, the displaced and the wanderers showcase Owens’ gift for storytelling and searingly soulful voice infused with the guttural guitar of Joey Burns and John Convertino’s masterful drumming and sweeping mariachi horns. Music conjures the open road’s wild romanticism, distilling the Scottish and Americana into a unique blend.

A new entry at No.25 is Moch (Arc Music) from modern trad fusion band DLÙ. A truly remarkable album, Moch champions the Gaelic language and culture, celebrating the generations who have fought, and continue to fight, against its neglect. The four founder members – Moilidh NicGriogair, Zach Ronan, Aidan Speirs and Andrew Grossart – first met at Glasgow’s all-Gaelic school later calling in Jack Dorrian to complete the young Scottish Gaels line-up.  DLÙ combine uplifting, fast-paced traditional Scottish tunes with their influences of funk, rock, pop and classical to create an uplifting, energetic sound that is uniquely their own.

After The City (GFM) is the 3rd release from Brighton-based Bird In The Belly landing at No.36.  Inspiredby ‘After London’, the 1885 post-apocalyptic novel by Richard Jeffries that describes England’s slow rot and eventual renewal following a catastrophe, the ambitious concept album beguiles and disturbs in equal measure. Rich with their trademark ‘folk noir’ sound, the album is cinematic and beautifully crafted. Ben Webb’s gravel-edged vocal fuses with the crystal-clear voice of Laura Ward underpinned by an array of instruments that include violin, bass pedal, synth, banjo and bodhran by Adam Ronchetti and Tom Pryor.A startling, theatrical album from an uncompromising collective who continue to be a revelation.