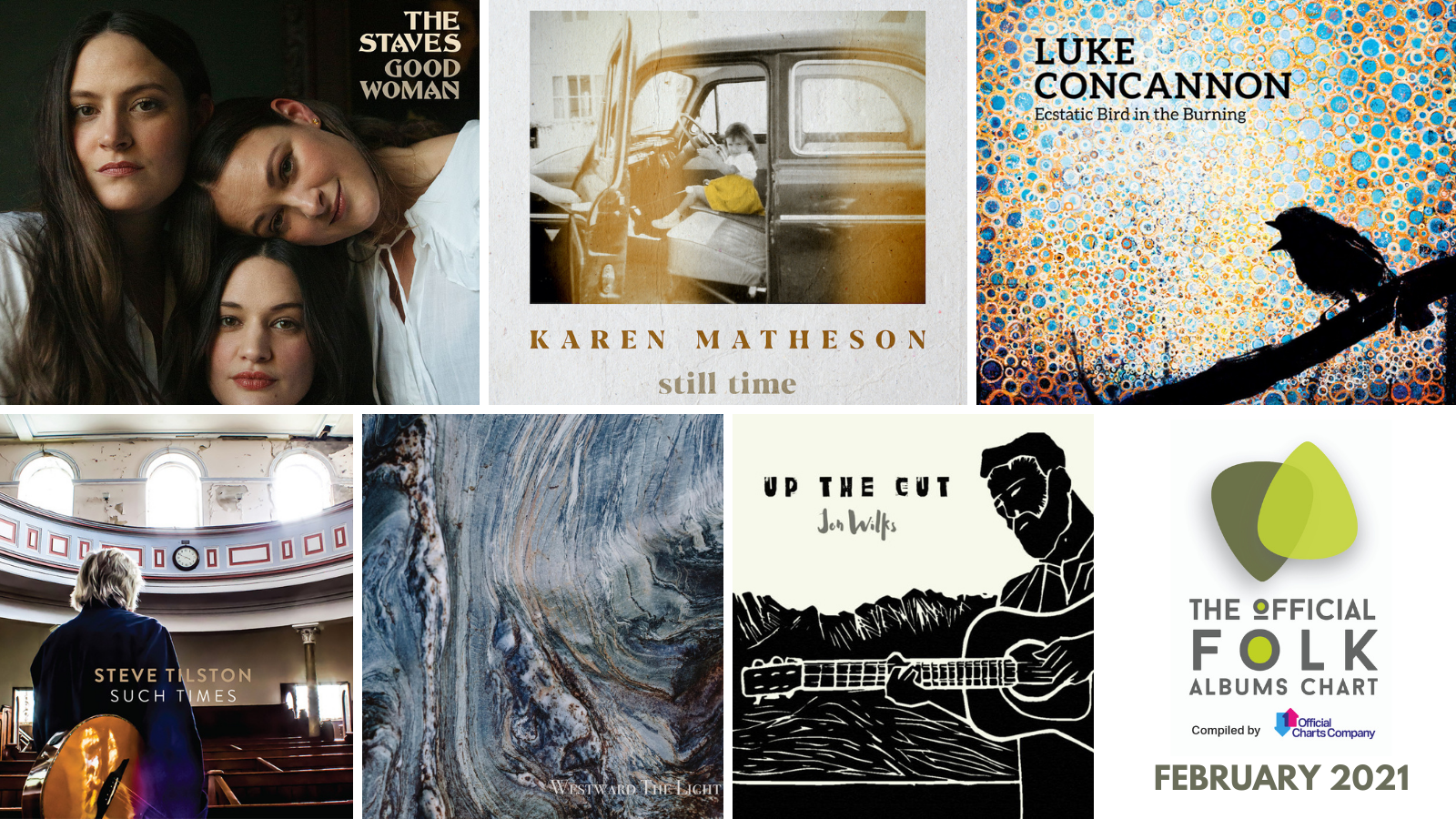 Today, the Official Charts Company in partnership with English Folk Expo reveal the Top 40 best-selling and most streamed folk albums released in the FEBRUARY reporting period.

Six new releases have entered the Top 40 chart, all being brand new recordings

Straight in at No.1 on the Folk Albums Chart and No. 13 in the Official Albums Chart, is Good Woman (Atlantic Records), the long-awaited third album from English indie folk trio, The Staves. While the breath-taking harmonies of the three sisters, Emily, Jessica and Camilla and their astounding gift for melody are fully evident, there is a new found boldness and lyrical directness that is indicative of three lives turned upside down. The album was written amid major upheaval, heartbreak and bereavement – the loss of their mother, the birth of a child and the painful end of a relationship.  Finding strength in the vulnerability, beauty in the sadness and magic in the despair, the three sisters’ new-found autonomy and confidence is reflected in a an expansive and exhilaratingly powerful new sound and a set of emotionally affecting songs.

Charting at No.12 is ‘Ecstatic Bird In The Burning’ (The Movement)  from Anglo-Irish singer-songwriter, Luke Concannon, his second solo album since parting ways with cult folk hip hop act Nizlopi.  Combining folk, blues and jazz, the album is his first in 8 years following time spent in Palestine volunteering as a peace worker in the West Bank and relocating to the US to marry his wife, classical singer, Stephanie Hollenberg who appears with him on all his solo recordings. True to his Irish roots, storytelling runs through his bones. The album is a mesmerizingly honest collection of songs; part love letter, part poem, part call to action.  Alternating  between grief and zest for life, despair and hope, anger and love, it explores the ecstasy of being alive, even in a burning world.

Recognised as one of Scotland’s finest Gaelic singers, folk songstress, Karen Matheson releases her new album, Still Time (Vertical) taking its place at No.10.  Known as the lead voice of Celtic super-group Capercaillie, the deep well of traditional songs have been her inspiration for over 35 years, yet on this album, she combines traditional songs with contemporary.  Music is bold, featuring an intoxicating palette of sonic textures that include e guitar, mandolin, whistle, bouzouki and banjo, yet it’s Matheson’s rich, entrancing voice and heartfelt poetry that is so entrancing.

Widely celebrated within the world of folk and contemporary music, Steve Tilston isone of the UK’s most gifted songwriters and virtuoso guitarists.  He  enters the chart at No. 16 with his new recording, Such Times (Riverboat),released, remarkably, 50 years after his debut.  Using his new self-designed Brook ‘Calder‘ guitar to skilfully showcase his superb musicianship and lyrical mastery, Tilston presents a set of timeless, well-crafted songs weaving his magic on subjects including homelessness, an early ramble on the moors, and the magical effect of music on children. The collection includes two masterful instrumentals alongside a cover of Antônio Carlos Jobim’s classic ‘Waters Of March’.

The only debut album to appear in this month’s chart comes from Scottish folk band, Westward The Light (Braw Sailin’) whose self-titled release lands at No. 35.  The quartet are all familiar faces on the folk scene as members of other bands, but here, their blend of fiddles, viola, harmonium, guitar and piano create a new, dynamic expression of an age-old sound.   Reflecting their upbringings immersed in the culture, traditional folk music and landscape of Scotland, their majestic sound is heard across a collection of traditional songs simply arranged and expertly played.

Finally, in at No. 39 is Jon Wilk’s Up The Cut, an album of traditional songs from Birmingham and the wider Midlands,  beautifully recorded, stripped down, just guitar and deeply affecting vocal. The collection reflects Wilk’s research into the rich history of street balladry of his beloved city and provides an insight, though songs of centuries past, of work, class, love and loss.