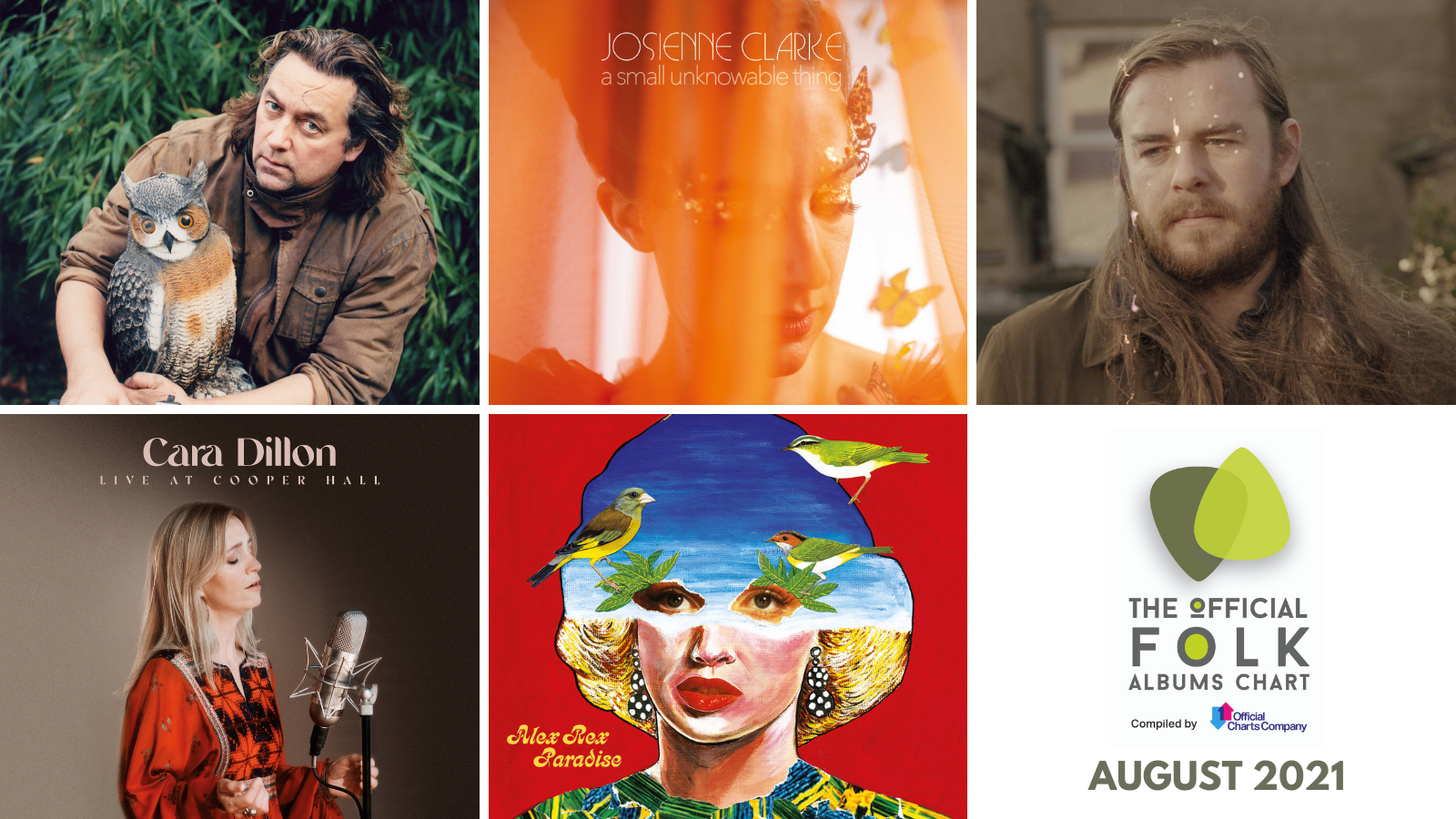 Today, the Official Charts Company in partnership with English Folk Expo reveal the Top 40 best-selling and most streamed folk albums released in the August reporting period.  The chart is first announced to the public at 7pm BST on Tuesday 7 September as part of the Official Folk Albums Chart Show presented by Folk on Foot via their YouTube channel and podcast feed.

Five new releases have entered the Top 40 chart which include four brand new recording and one compilation.

A Small Unknowable Thing (Corduroy Punk) is the latest album from singer-songwriter Josienne Clarke, in at No.6.  In response to feeling compromised and questioned as a woman in the music industry, Clarke, has, for the first time, self-produced and self-released this 13-song collection, taking total control of arranging, songwriting and its musical direction. With touchstones spanning a vast musical collage of anger and hope, the album allows for a renewed focus on Clarke’s poetic lyricism and storytelling. Clarke’s arresting Joni Mitchell-esque voice is accompanied with guitar, at times sparse and minimalistic, at others, grungy and distorted. It’s synth-folk stylings and sonic experimentation pushes the boundary of indie-folk to daring new areas.

Straight in at No.2 is Straight Outta Caledonia (School Daze), a collection of songs from the Scottish singer/songwriter and unsung troubadour, Jackie Leven released ten years since his death in 2011. Despite being one of the greatest wordsmiths and singers  Scotland ever produced, Leven was an artist who largely remained in obscurity, yet he left behind a catalogue of 30+ albums recorded during his 50+ year career. Leven began making psychedelic, progressive music in the late 60s before emerging as an epic storyteller full of pathos, humour and humanity in the 90s. The most effective tool at Leven’s disposal was his multi-octave voice and songwriting panache; his lyrics are dense with imagery that can veer from apocalyptic to the comically banal in a single sentence. But his true genius was that he could touch something elemental and true in the beholder. This ten-song collection seeks to introduce Leven’s music to new generations.

I Would Not Live Always (River Lea Recordings) is the extraordinary debut solo recording from Dublin-born singer, guitarist, flautist and practitioner of the double tin whistle, John Francis Flynn, straight in at No.8. A founding member of celebrated traditional Irish group Skipper’s Alley, Flynn is as much anexperimental electronic artist as he is an interpreter of traditional song. At its heart lies Flynn’s rich, resounding voice wrapped by tape-loop drones and electronic sounds alongside an array of traditional instruments and an exemplary choice of material. Tracks include songs learned from recordings of Shirley Collins, songs written by Ewan MacColl, and a West Indies shanty and tunes picked up by John along the way. Enthralling, moving and powerful the album personifies Flynn’s boundless approach to traditional music.

Just one place behind at No.9 is Live At Cooper Hall (Charcoal) from one folk’s leading artists, and one of the finest exponents of traditional Irish song, Cara Dillon. During the lockdown of 2020, Cara, with husband and musical partner Sam Lakeman on grand piano and guitar, recorded a set of songs at Cooper Hall in Somerset, without distraction, not even an audience. The performances, broadcast online to fans across the world captured the reflective and intimate nature of the performance – the heartbreak and longing for home so evident in the lyrics. The response was stunning. ‘Live At Cooper Hall’ is a 16-song collection of their favourite songs from the performances exquisitely capturing a special shared moment between two of folk music’s finest performers in a career-spanning acoustic set with two previously unreleased songs.

Very few drummer-singers combine the masterful musicianship, vivid lyrics and expressive vocals as Glasgow polymath, Alex Rex. As a band leader, Alex Neilson has drummed with an eclectic range of musicians from Bonnie “Prince” Billy to Shirley Collins alongside a 10-year stint with his own critically acclaimed psych-folk outfit, Trembling Bells. Landing at No.20, his fourth album, Paradise (Neolithic Recordings), was written in early lockdown with no opportunity to rehearse (Neilson’s preferred method), capturing the songs at a vital tipping point of discovery. From Celtic rock guitar stylings, punk gospel blues, to bubble-gum country, ‘Paradise’ demonstrates that Rex is a master-of-composition in the classic sense, an astounding lyricist and a kick-ass drummer!