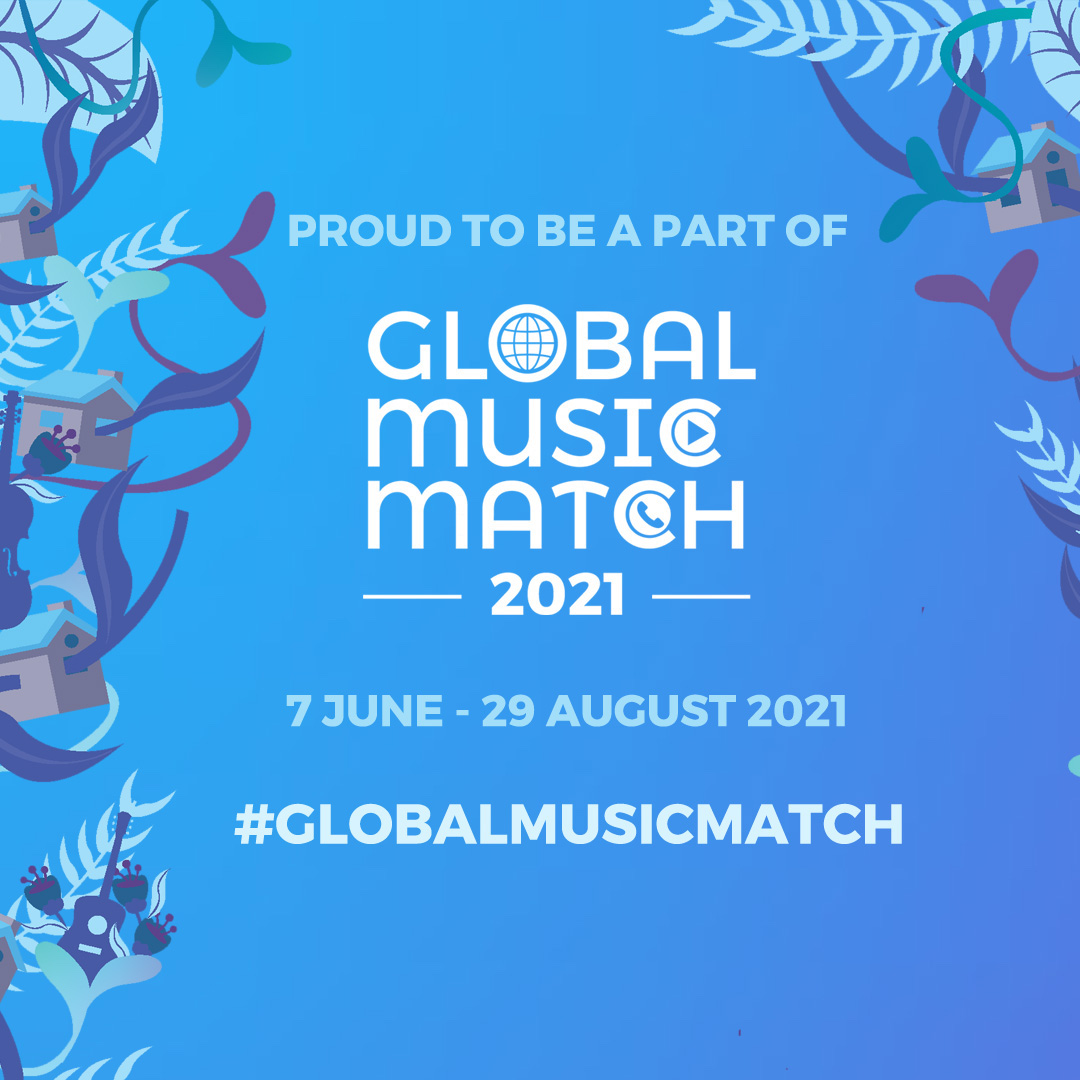 Following the colossal success of the debut Global Music Match in 2020, the worldwide matchmaking programme returns from June 7, featuring 78 artists from 17 countries and four continents.

Artists from Australia, Brittany in France, Canada, Catalonia in Spain, Chile, Denmark, England, Finland, Iceland, Ireland, Italy, Norway, Sweden, Scotland, Taiwan, USA and Wales are set to collaborate over the coming three months, in what is thought to be the world’s largest online musical matchmaking programme.

Artists from around the world have been grouped into international teams of six, from different countries, and over the coming 12 weeks will collaborate with each other across social media. Each act has an assigned two-week Featured Artist period, during which time their five team-mates will introduce them to five new audiences around the globe – rotated amongst all artists, up to the end of August.

With 78 artists, 13 teams of six will operate simultaneously, across borders, countries and timezones, introducing audiences to three months of new music, whilst artists largely remain unable to tour internationally.

Six artists have been selected from England and will be placed into groups, comprising five other acts from different countries. Those chosen for the 2021 instalment of Global Music Match are: Chris Cleverley, Dan Whitehouse, Eliza Marshall, Jack Rutter, Lucy Farrell and Lunatraktors.

Born out of the COVID-19 pandemic, and created as a unique and direct response to the sudden limitations imposed on the worldwide music industry – and in particular, international showcasing – Global Music Match seeks to enhance and develop artists’ international fanbases, presence and peer connections in global markets.

Not only that, but the 2020 edition established lifelong working partnerships, market development, substantially enhanced international networks, and collaborations across the globe – all during the most challenging year the live music industry has ever known.

Global Music Match 2020 ran throughout August to October 2020, and officially wrapped with a four-hour showcase of the project and its collaborations at Folk Unlocked, the acclaimed digital edition of the Folk Alliance International (USA) conference in February 2021. On top of the strategic aims central to Global Music Match, February’s Global Music Marathon illustrates just one example of the international music industry taking serious note of the project – as well as the calibre and export-readiness of participating artists – presenting them to hundreds of leading buyers, bookers, programmers and presenters at the world’s largest folk-based music conference.

Showcase Scotland Expo Executive Producer, Lisa Whytock said: “We’re really excited to see Global Music Match kick off again next week. The idea came about on a Zoom call between myself and Millie Millgate of Sounds Australia early on in the pandemic last year, and we have since seen it grow to include so many export organisations and artists – all of whom continue to amaze us with their positive outlook and enthusiasm for the opportunities it presents.

“Over the last year, everyone has been connecting through social media – yet Global Music Match really harnesses the power of collective markets, and ultimately the goodwill and supporting nature of the worldwide music community. We are really looking forward to seeing how all the artists work together this time round. With so many from around the world, most of the musicians won’t have met in person – let alone toured in their respective countries – so once again it really is going to establish new and lasting international connections”

For further information, head to www.globalmusicmatch.com, or search for the hashtag #GlobalMusicMatch to check out the worldwide introductions to new artists.

Chris Cleverley was born under a solstice moon. Since the hazy twilight of that urban, honeysuckle June, a trail of mysticism has followed in his wake. With a visceral lyrical style, akin to the American greats Elliott Smith, Paul Simon & Sufjan Stevens, his songwriting shines a light on diverse, arresting themes from deteriorating anxious minds to damaging gender constructs. His blistering yet delicate guitar technique, described as ‘Impressive’ by The Telegraph, is infused with the essence of folk revival masters Nic Jones and John Renbourn. Chris’ critically acclaimed album ‘We Sat Back and Watched in Unfold’ is out now.

Dan Whitehouse is an acclaimed and award-winning English songwriter and composer signed with Reveal Records.

Across five solo albums he has gained a reputation as “a fine songwriter, a unique vocal talent and a talented multi-instrumentalist/performer” (MAVERICK) and has collaborated or toured with acts such as Joan as Policewoman, Kris Drever, Willy Mason, Gretchen Peters, Eddi Reader, and blues legend Peter Green.

The son of a Wolverhampton community radio pioneer, the coming together of community through music has always been important to Dan, and is something he draws upon both in his own work, and as a songwriting tutor, one-to-one mentor and workshop leader.

Eliza is a ﬂautist who is extremely in demand for her versatility and ability to play in all styles and genres, and she enjoys a diverse career of music from all corners of the globe. A lover of travel, she has toured with Peter Gabriel throughout Europe, North and South America, and all over India with sarod guru Amjad Ali Khan/Britten Sinfonia. She founded folk band ‘Ranagri’, recording ﬁve highly acclaimed albums with Stockﬁsch and Wrasse Records, and performing at Cambridge Folk Festival, Birmingham Symphony Hall, The Union Chapel, and The Terry Wogan Show.

Featuring her unique Indian bansuri playing, she appeared for the World Première of Joby Talbot’s ballet ‘The Winter’s Tale’, as onstage soloist at The Royal Opera House accompanied by Orchestra of Covent Garden, followed by performances with The Queensland Symphony Orchestra, Brisbane. It received 5* reviews from the telegraph and all major critics., and has gone on to give sell out performances for four further seasons at the ROH. Eliza can be heard on numerous blockbuster ﬁlm scores and albums, including for Ridley Scott and Peter Jackson, Hans Zimmer, James Horner and Danny Elfman, on Lord Of The Rings, Prometheus, The Great Gatsby, with Paul McCartney, The Who and Stevie Wonder, at Abbey Road and Air Studios, or on 18 ﬂutes for The Lion King in London.

Eliza believes strongly in the binding qualities that cross-cultural music-making offers. Trips to Africa and Scotland are an important part of Eliza’s musical passions, also fulﬁlling her love for wilderness. This has inspired her latest project ‘Freedom To Roam’, launching at Cecil Sharp House in December 2021.

Jack Rutter grew up in the Holme Valley area of West Yorkshire, a place steeped in a wealth of traditional song, and following a BSc degree in Countryside Management at Newcastle University has forged a highly successful career playing music across the UK and Europe. In addition to his acclaimed solo work, he has become a highly sought after collaborator for a host of the biggest names in folk music such as Seth Lakeman, Sam Sweeney and Jackie Oates as well as playing in the celebrated instrumental trio Moore Moss Rutter.

The release of Gold of Scar & Shale is set to confirm Jack Rutter’s place as a solo artist, singer and performer of traditional songs first and foremost, marking him as one of the standout voices of the folk, roots and acoustic music scene.

Odd, unconventional melodies, poetic, sophisticated song-writing and the bewitching clarity of Kent-born, Canada-based Lucy Farrell’s voice are made elegant with sparse, careful accompaniment on tenor guitar and occasionally viola, carving out a unique niche for an artist at the forefront of contemporary English folk music.

Finding an international audience among artists like Julia Jacklin, Emily Portman, The Weather Station, The Unthanks and Eliza Carthy, the 2017 BBC Radio 2 Folk Award Winner Lucy Farrell is not only awarded as a renowned composer and singer, but also as viola/fiddle/tenor guitar-player. Her work as a band member and collaborator with such artists and projects as Eliza Carthy and the Wayward Band; Gluepot; Modern Fairies; The Furrow Collective; Carthy, Oates, Farrell & Young; and her duo work with Andrew Waite and Jonny Kearney, respectively has meant releasing a collection of her distinctive solo work has had to wait – until now.

Songs from Lucy’s debut solo album, recorded at Wenlock Abbey in Much Wenlock, are scheduled for release through Hudson records from Fall 2021.

Lunatraktors are a collaboration between choreographer and percussionist Carli Jefferson and nonbinary vocalist and composer Clair Le Couteur. Starting with an apocalyptic question – What’s left when we’ve lost everything? – the project strips folk song down to rhythm and voice. Their ‘broken folk’ sound combines harmonic singing with tuned percussion, harmonium and analogue synth, combining Le Couteur’s self-taught four octave range with the hybrid of tap dance, flamenco and body percussion Jefferson developed after touring with Stomp. The pair turned heads in 2019 when their DIY debut This Is Broken Folk – drums and vocals recorded live in a viaduct arch by Ramsgate harbour – made it onto MOJO Magazine’s Top Ten Folk Albums.