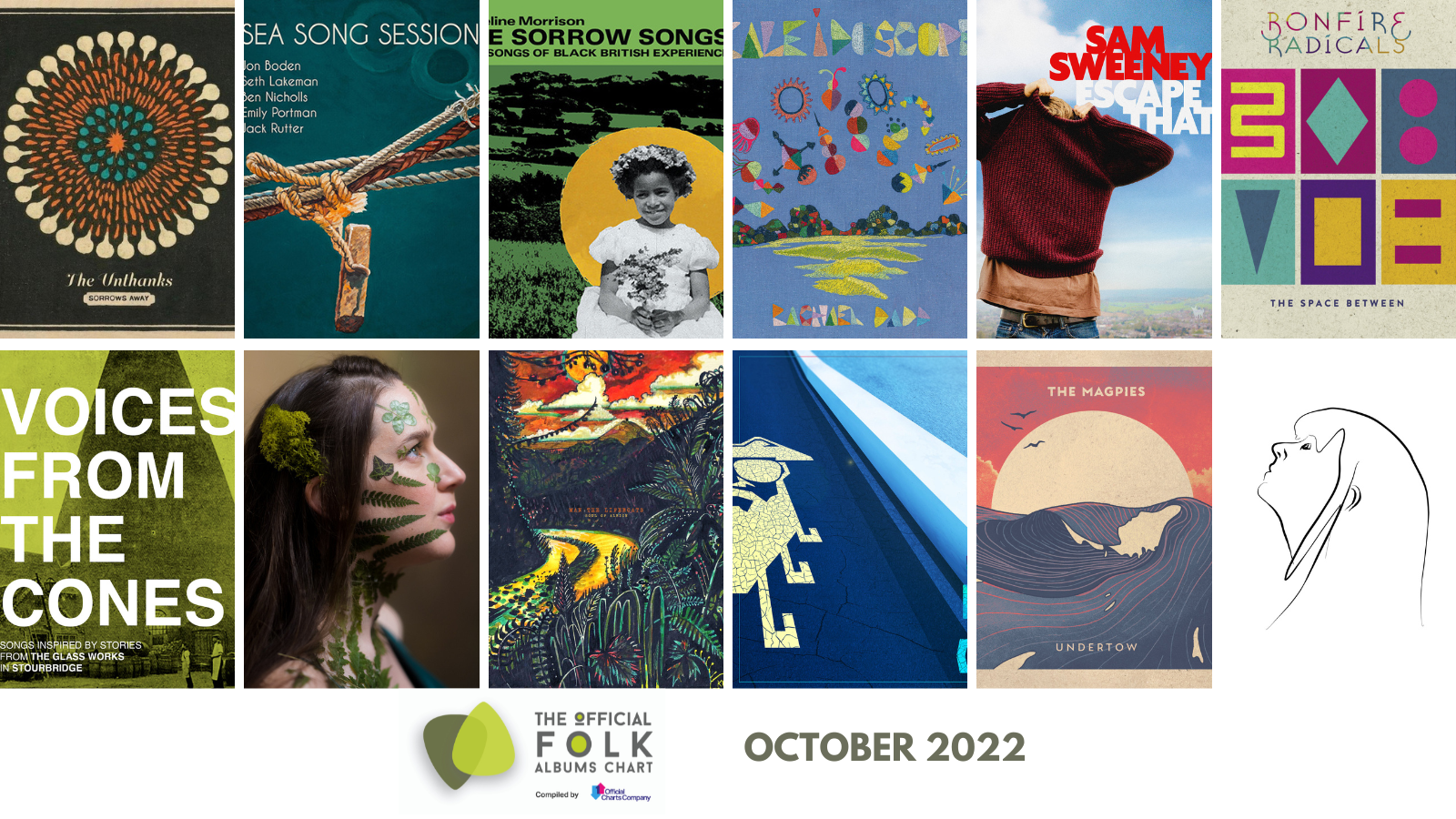 On Tuesday 1 November the Official Charts Company in partnership with English Folk Expo reveal the Top 40 best-selling and most streamed UK folk albums released in the October reporting period. It is announced to the public at 7pm GMT as part of the  Official Folk Albums Chart Show  presented by Folk on Foot via their YouTube channel.

The October chart sees a bumper number of 12 new entrants, not matched since November 2020, with 8 landing in the Top 20. The chart is dominated by female artists with only one all-male band and unusually, all entrants are from England and all are released on independent labels. As always, the chart reflects the broad scope of music styles and approaches that are encompassed by the diverse and talent-fuelled genre that is folk.

This month’s brand-new No.1 is Sorrows Away (Rabblerouser) from one of Britain’s best loved folk bands, The Unthanks. Its title heralds seeing off the past and welcoming in the new following years of upheaval, and is the first Unthanks album in 7 years. Recorded in their Northumberland home, the album is a collection of traditional songs with two originals that features the ethereal, moving harmonies of sisters Rachel and Becky, shimmering brass and superb arrangements.  With enthralling long-form songs, the dazzling album is both uplifting and austere.

In at No.4 is Sea Song Sessions (Topic), a collection of British maritime folk songs and sea shanties from a collective of leading folk luminaries; Jon Boden, Seth Lakeman, Ben Nicholls, Emily Portman and Jack Rutter.  Choosing to record material from each other’s own sizable oceanic repertoire alongside traditional songs and some newly written for these sessions, the collective captures the story of an island nation whose political and social history is so undeniably tied to its relationship with the sea.

At No.5 is The Sorrow Songs: Folk Songs of Black British Experience (Topic) from Cornwall-based folk singer, songwriter and multi-instrumentalist, Angeline Morrison.Following a year of research, Morrisonunearths untold histories of the African diaspora who have lived on these islands, ‘re-storying’ them and embedding them into the folk tradition.  Produced by Eliza Carthy and with sparse accompaniment, Angeline’s’ mournful voice is at the centre of a set of original, powerful songs honouring these black ancestors in what is arguably one of British folk music’s most important works.

Kaleidoscope (Memphis Industries) is the new recording from the wildly creative free-form singer-songwriter, Rachael Dadd, in at No.6. Born from her struggles through lockdowns and finding escapism through music and songs are largely rooted in truth and love – so personal, yet universal. Rachael’s contrasting influences can be heard here; her time spent in Japan, love of synth worlds and Bristol’s jazz scene all combine to create a collection of bold yet gentle melodies.

Sam Sweeney, renowned fiddler and veteran of the mighty Bellowhead releases Escape That (Hudson) straight in at No.12.  As his first entirely self-composed record, it’s an honest and fearless expression of himself that ties together all of his musical passions. Combining pop hooks and aesthetics with his pioneering work in the world of traditional dance tunes, the result is an infectious, expressive and passionate collection of songs.

At No.15 is English singer, songwriter folk musician, Dan Whitehouse with Voices From the Cones (Heanton), an extraordinary double album celebrating the untold stories of the community around Stourbridge’s Glassworks which closed down in the 1990s. This narrated song cycle of ballads is a beautiful, emotive, journey into the history and future of the glass industry.

In at No 20 is Now & Then (Corduroy Punk) from indie folk artist, Josienne Clarke. A stunning, surprising, diverse collection of covers of both traditional and contemporary songs loved by Clarke, set in the way she sees, hears and feels them today.  Each song is deeply melancholic in a way that speaks to her as a singer, songwriter and an admirer of lyricism in songcraft,  showcasing her mesmerising, crystal clear voice.

A tonic for these troubled times comes from 3 new releases of powerful, joyous and engaging band-led music.

At No.13 is The Space Between (Bonfire Radicals) from the irresistibly fun Bonfire Radicals. Rooted in Birmingham yet inspired by folk traditions from around the globe, the female-frontline of recorders, fiddle, clarinet and vocals provide a collection of vibrant contemporary originals and inventive arrangements. At No. 27 is Soul Of Albion (Wood Head) from five-piece folk rockers Man The Lifeboats. A rich andvaried treasure trove of well-crafted songs, lilting mandolins, fiddle-driven melodies and stomping beats that meet with piano-led ballads.  Blackbeard’s Tea Party ups the antewith Kick The Curb (BTP) at No. 30. With two drummers, electric guitars, fiddle, melodeon and 4-part harmonies, music drenched in tradition is given a bombastic rock edge with earth shattering riffs and driving dance rhythms.

Elsewhere, indie-folk stalwart Polly Paulusma releases The Pivot On Which The World Turns (Wild Sound) in at No.38.  Polly’s singular brand of insightful and poignant songs explore the roles of women in our lives and across history from a variety of perspectives touching on love, death, success and parenthood. Undertow (Gilded Lily) from female trio, The Magpies lands at No.37. Impressive song writing and svelte harmonies underpin the album of almost-all original songs. With themes of sisterhood and solidarity, a fervent thread of feminism runs through the album which traverses traditional folk, bluegrass, Celtic and Appalachian trails.