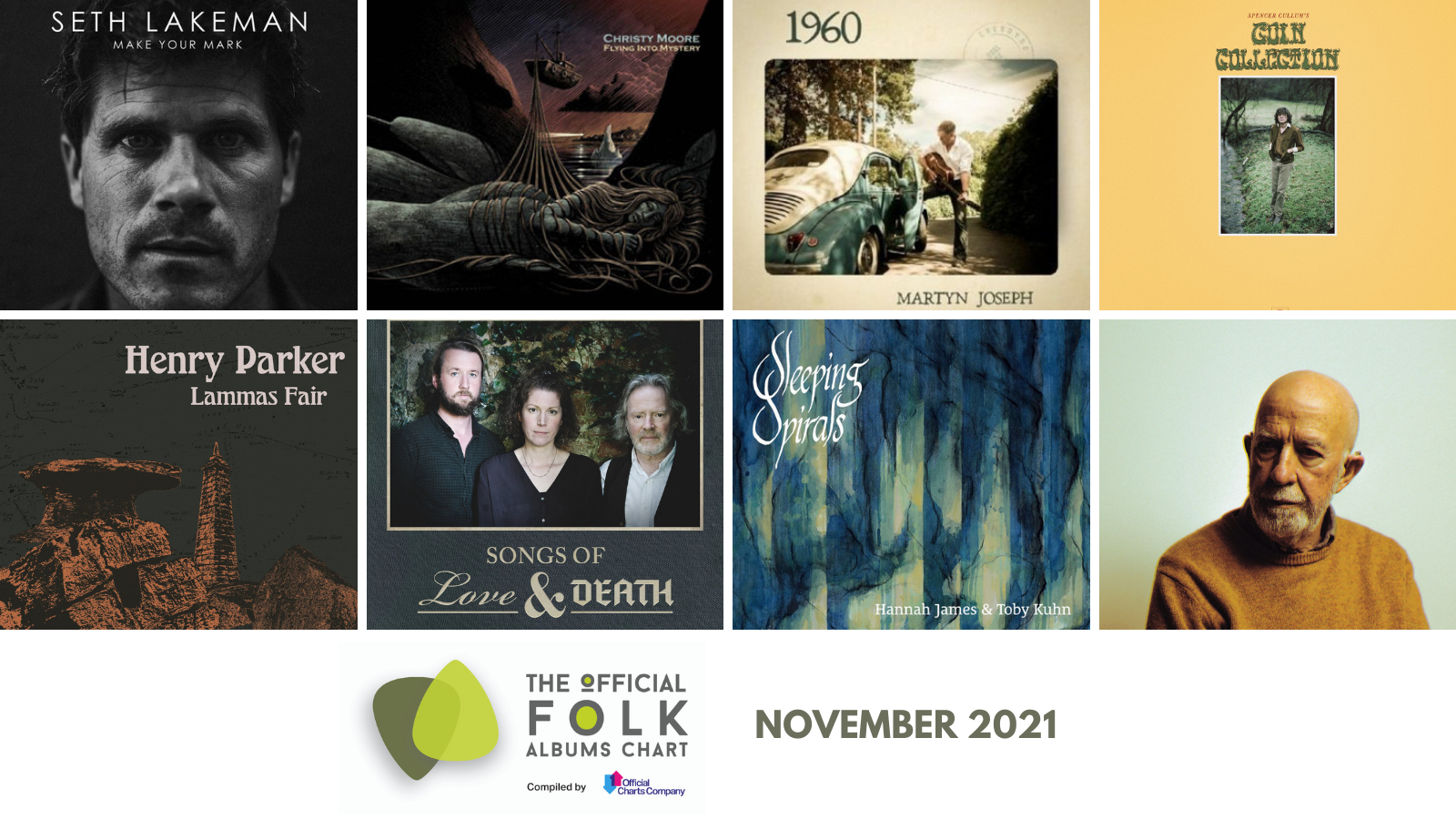 On Tuesday 7 December, the Official Charts Company in partnership with English Folk Expo reveal the Top 40 best-selling and most streamed folk albums released in the NOVEMBER reporting period.  The chart is first announced to the public at 7pm GMT as part of the  Official Folk Albums Chart Show  presented by Folk on Foot via their YouTube channel and podcast feed.

There are eight new entrants this month which, as usual, represent folk royalty and emerging stars. Christy Moore, Martyn Joseph and Reg Meuross, have between them, racked up over 60 albums in careers that collectively span 103 years!  Newer faces Spencer Cullum and Henry Parker explore the sounds of 60s and 70s while environmental issues and a look at the ‘self’ in a not-quite post pandemic world proves to be themes that run across all sub genres and ages.

Straight in at No.1 is Make Your Mark (Honour Oak) from one of the UK’s most acclaimed and best- known folk artists, singer-songwriter and fiddler, Seth Lakeman. It follows last year’s ‘A Pilgrim’s Tale’ which,  like many of his recordings, has its roots in an historical tale with its Mayflower theme. This release however, was written during his pandemic-enforced time off the road and takes inspiration from a broad range of current subjects from the environment, love, death and self-belief. The album delivers an excellent set of bold, fast-paced folk songs and superb musicianship.

Fresh from his Lifetime Achievement honour at this year’s RTÉ Irish Folk Awards, legendary singer-songwriter and Irish icon, Christy Moore takes the No.3 slot with Flying Into Mystery (Sony Music Ireland). Christy has released more than 25 solo albums since 1969 and this collection sees him bringing to life other artists’ songs through his unique interpretations. Songs from Wally Page, Gary Moore and Bob Dylan amongst others, sit side by side with traditional songsand Moore’s own distinctive songwriting. His nuanced, compelling voice is, as ever, commanding.

1960 (Pipe) is Martyn Joseph’s 23rd studio album in a musical life spanning four decades. The Welsh folk-rock singer-songwriter has built a reputation for his expressive, poignant, socially-aware lyrics, powerful voice and exceptional guitar playing earning comparisons to Bruce Springsteen and John Mayer. Having turned 60 last year, a self-examination and a more personal record was inevitable. In at No.13, the album explores moments of a “soul that’s taking stock”. In evidence is Joseph’s trademark melancholic sensibility and unsentimental candour. Melodies are muscular with songs carrying the weight of despair, but also a depth of gratitude and wonder.

Although London-born Spencer Cullum relocated to the US eight years ago, his debut album, Spencer Cullum’s Coin Collection (Full Time Hobby) pays homage to the ’60s and ‘70s psych-folk and prog heroes of his homeland such as Soft Machine and Fairport Convention.  Cullum is one of Nashville’s most in-demand pedal steel session musicians, yet here he steps out from behind the instrument into the spotlight as vocalist and songwriter too. Occupying the No.24 slot, this quintessential English folk record conjures up the Canterbury psychedelic scene, boasting a bell-clear sound, deftly shimmering songs and dreamy vocals with non-narrative lyrics culled from the mystic corners of the subliminal mind.

Singer-songwriter-guitarist, Henry Parker also draws deep from the well of 60s and 70s revivalist sounds, joining the past and present. Lammas Fair (Cup and Ring) sliding into the No.27 spot, combines original compositions that echo ancient tradition, and traditional folk songs that deepen these historical roots. Inspired equally by his fascination for late 60s counterculture and his love for the moorlands of West Yorkshire, there’s a sense of place – via landscapes and the characters that inhabit them – central to Parker’s work. In gorgeous, sweeping, songs, highly accomplished, melodically twisting guitars, and Parker’s rich, yet restrained voice we hear a strain of progressive folk music found nowhere else.

Songs of Love & Death is the collaborative album from two of England’s finest and most engaging folk acts,  Reg Meuross and Harbottle & Jonas, landing at No.30.  In a short period of time, Harbottle & Jonas (husband and wife duo, guitarist David and keyboardist, Freya) have made an impressive mark on the UK’s folk scene, while Reg Meuross is a mighty singer-songwriter who has been a constant presence on it throughout his thirty-year career. Yet despite thirteen solo albums to his name, he has never delved into the traditional songs that have so influenced his writing.  ‘Songs of Love & Death’ is a stark yet beautiful album of traditional songs. David and Freya’s exceptional arrangements and rich harmonies, proving the perfect accompaniment to Meuross, whose talent for conveying the true meaning behind a song is on full display.

Landing at No.35 is Sleeping Spirals (Jigdoll), the debut duo album from singer, accordionist and dancer Hannah James and French cellist, Toby Kuhn. Both are highly skilled musicians who bring together English folk and European melodies, both traditional and original. Introduced first to the rhythms of clog-dancing, James’s musical journey has seen her further explore the vast musical possibilities of accordion, voice and feet in a dizzying display of sensitive virtuosity. With Kuhn’s cello, the interplay is delicate, joyful and moving.  This highly unusual music explores links with the natural world and with folk traditions across Europe while the wide palette of sounds and textures lift James’s pure voice and deeply personal songwriting.

in the Sleeping Spiral para, I’d beware of calling it Hannah’s debut.  You possibly just need to make it clearer that it’s the debut of them as a duo.  Not sure the ‘First introduced to the rhythms of clog dancing’ works as I’m not exactly sure what you mean.  Is it that Hannah’s journey with folk music started with clog dancing?

The Magic Lantern is British Australian singer-songwriter and composer Jamie Doe whose music draws on a wide range of influences including folk, jazz, classical and contemporary music, almost impossible to pigeon hole. A Reckoning Bell (The Magic Lantern), in at No.38, is an unashamedly emotional album written and recorded while helping to care for his father with Alzheimers disease. It examines what loss can teach us about love and how love’s many small acts give a life meaning. The album includes beautiful examples of Doe’s trademark classical guitar-based songs and contains references as diverse as Woodie Guthrie, Macbeth and the New Testament. The album sounds both dreamy and direct, Doe’s easy, inimitable vocals and richness of orchestration belying the devastating, powerful songwriting.