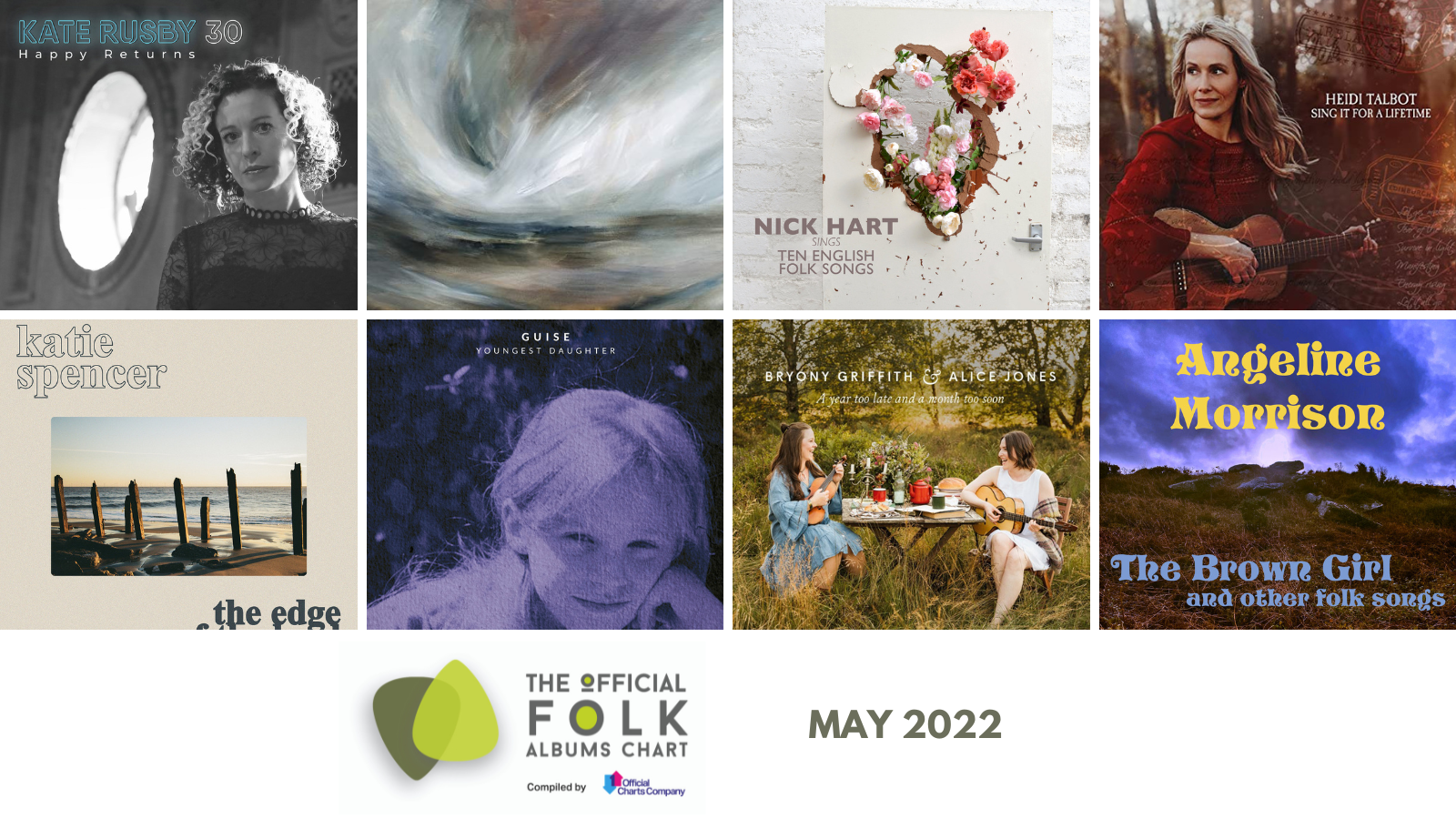 On Tuesday 7 June the Official Charts Company in partnership with English Folk Expo reveal the Top 40 best-selling and most streamed folk albums released in the May reporting period. The chart is first announced to the public at 7pm GMT as part of the Official Folk Albums Chart Show presented by Folk on Foot via their YouTube channel.

Eight new releases have entered the Top 40 chart this month with half digging into the well of UK’s traditional music, including Bryony Griffiths & Alice Jones who come together as a force for the Yorkshire Tradition, singing songs from their native county.

30:Happy Returns (Pure Records) is the brand-new No.1 from singer Kate Rusby, a joyous celebration of her impressive 30-year career. Since her first ‘proper gig’ in 1992, Kate has gone on to release 19widely praised albums and earn the title of ‘First Lady Of Folk’. Returning to points in her career, Kate has selected 15 songs that have been recrafted and newly recorded. The importance of people met and songs sung is reflected by the stellar array of guest musicians who appear with her – Ladysmith Black Mambazo on the exhilarating stand out track, ‘We Will Sing’, Richard Hawley, Darlingside, KT Tunstall, Sarah Jarosz and more. Throughout, Kates’ unique pure voice shines through.

Straight in at No.4 is Nine Waves (River Lea Recordings), from contemporary folk duo, Ye Vagabonds, Irish brothers Diarmuid and Brían Mac Gloinn. Recorded in the Dublin Mountains, the album is a superb collection of traditional and original songs with their distinctive brotherly harmonies at its heart. Songs are soft, gentle and brooding with delicate arrangements and airy soundscapes. Both accomplished multi-instrumentalists, they are supported by cello and double bass from Irish contemporary classical group Crash Ensemble, alongside piano, saxophone, concertina and harmonium. A beautifully tentative, reflective and languid collection of songs.

In at No.5 is Nick Hart Sings Ten English Folk Songs (Roebuck Records) from roots singer and multi-instrumentalist Nick Hart. A departure from the stripped back approach of his first two albums, here, Hart has explored a different approach to the accompaniment of traditional song and augmented his distinctive guitar playing with harmonium, lyre, viols and a host of percussion and woodwinds, with some songs given a more multi-layered treatment. Central to the album is Harts deep respect for the nuances of traditional song and to the importance he places on story-telling, approaching the songs with the care and sensitivity for which he has become known.

Sing It For A Lifetime (Heidi Talbot) is the new entrant at No.10 from Irish-born singer Heidi Talbot, the latest in her 20-year career. Charting the painful split from her husband, folk musician John McCusker, Talbot presents her most exposed and personal work through a combination of self-penned songs and exquisitely chosen covers reflecting the huge changes in her life. With an international group of musicians including Mark Knopfler on guitar and the Appalachian fiddle legend and country producer Dirk Powell, and with the freedom to experiment and push boundaries, Talbot hit upon a blend of Celtic and Americana that sees her delicate, floaty, nightingale voice soar.

The Edge Of The Land (Lightship) is the compelling sophomore album from progressive folk singer-songwriter and guitarist, Katie Spencer, landing at No.14. Raised in the East Yorkshire flatlands, Katie’s landscape is that of open skies and widening rivers and it’s this sense of space and movement that flows through her music. Artists such as Joni Mitchell and James Taylor seep into her sound, carrying with them the idealism of the early 70’s folk movements. Songs explore themes of home, solitude and love against a backdrop of intricate finger-style guitar and Katie’s distinctive voice. Delicate and un-rushed, yet the intimacy and introspection still remain.

The only debut to enter the May chart is Youngest Daughter (Xtra Mile) from pop-folk quartet, Guise, in at No. 18. Fronted by singer-songwriter, Jess Guise, the album is filled with autobiographical songs written from the heart during a passage of personal reflection taking the listener on a voyage of love, loss, hope and personal growth. Produced by husband Frank Turner, Jessica’s delicate, cooing vocals and layered harmonies take centre stage with fiddles and flutes. The lush arrangements of the 13 tracks are as sweet and soulful as the characters of the songs themselves.

Established solo artists in their own right, Bryony Griffith & Alice Jones come together to release A Year Too Late And A Month (Splid) taking their position at No. 20.  Both Griffith, a highly regarded fiddle player and singer, and Jones, a singer, step-dancer and multi-instrumentalist, hail from the close-knit communities of West Yorkshire and are long-time purveyors of traditional English folk music. United by a mutual passion for the folk songs of their county, the album draws on stories inspired by the landscape, language and industry of their surroundings. Heart rending unaccompanied tales of woe meet with lively ditties and other masterful interpretations of treasured old songs.

Also steeped in a great love for the traditional music of Britain, is Cornwall-based singer and multi-instrumentalist Angeline Morrison whose new recording, The Brown Girl And Other Folk Songs (Angeline Morrison) is in at No.24. Using her distinctive, dark, but sweet voice as the main instrument, Morrison layers vocal harmonies, often unaccompanied, to communicate the feelings as well as the stories in this collection of traditional songs. Her sparse use of traditional instrumentation is used to great effect allowing the beauty of the song to shine. Recording the songs that most move her emotionally, Angeline’s collection of intimately performed songs makes for a powerful listen.