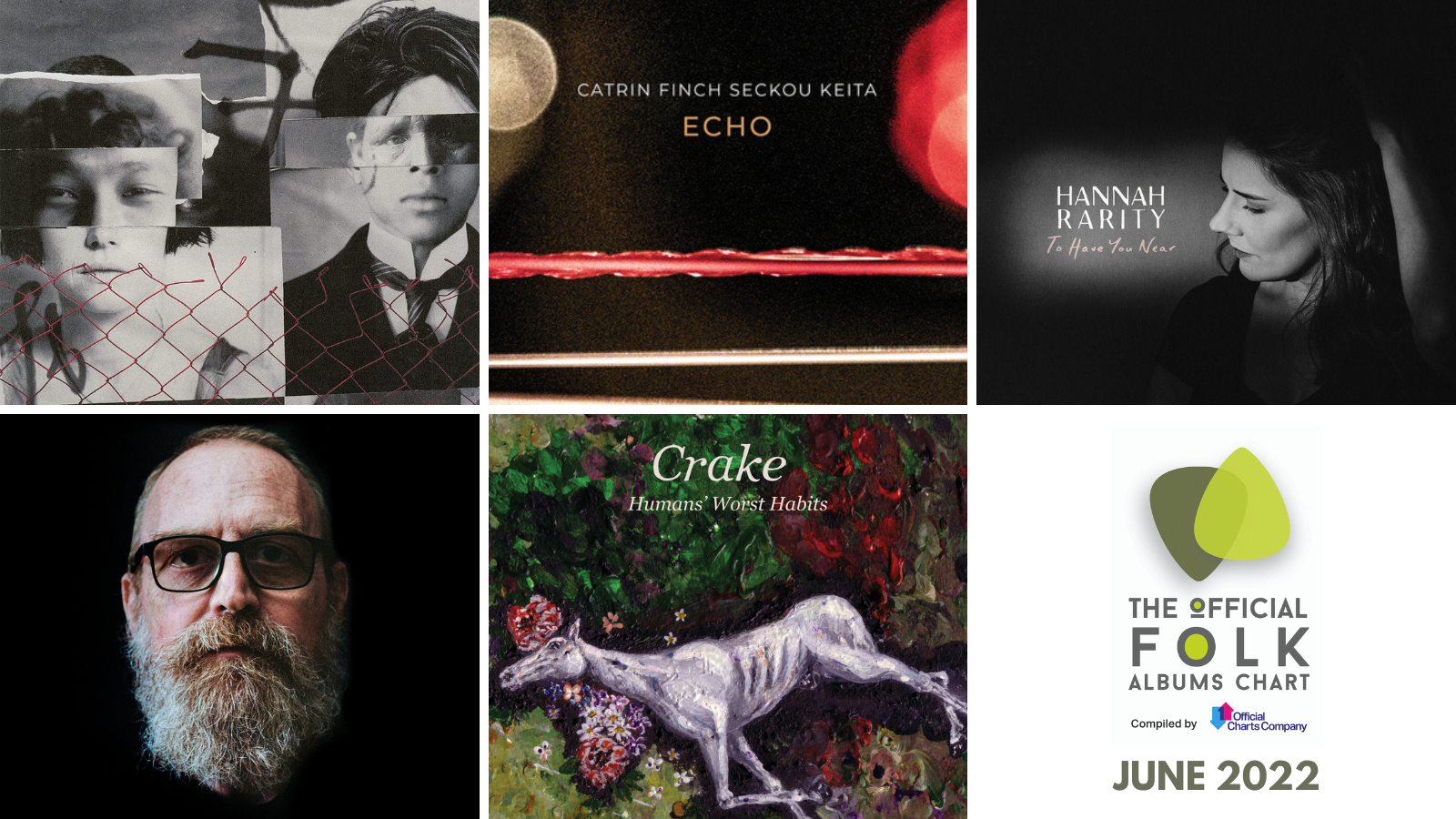 On Tuesday 5 July the Official Charts Company in partnership with English Folk Expo reveal the Top 40 best-selling and most streamed folk albums released in the June reporting period.  The chart is first announced to the public at 7pm GMT as part of the  Official Folk Albums Chart Show  presented by Folk on Foot via their YouTube channel.

Five new releases have entered the Top 40 chart this month.

Straight in at No.1 is For All Our Days That Tear The Heart (EMI), the extraordinary debut from Academy Award-nominated actress and singer, Jessie Buckley and Brit Award-winning producer and musician, Bernard Butler.   The pair join forces to present a dynamic collection of original songs that grew from a shared love and deep ancestral attachment to Ireland. Songs swoop out from the Emerald Isle taking in Appalachian blues, American jazz and Spanish folk traditions.  A sense of adventure permeates the spirited album whose moods range from achingly tender to euphoric crescendo’s, with Butler’s piano and guitar combining with Buckley’s rich, emotional and expressive voice. Songwriting is intense, but joyous – an utterly engrossing album.

The second collaborative album to appear in this month’s chart follows at No.3. Unlike the brand new collaboration of our No.1 slot, Echo (Bendigedig) celebrates the tenth anniversary of an extraordinary partnership between two virtuosos , Catrin Finch & Seckou Keita. The seamless union of Finch’s harp with Keita’s double kora merges two cultures, two histories and two personalities into one atmospheric musical journey.  On ‘Echo’, tunes were drawn from those the pair had accumulated during countless jams, from side-projects, a ballet score, TV commissions and other works-in-progress, with the addition of strings on four tracks adding a new dimension to their distinctive sound. Together they blend elements of new and old music from the Western Classical, Celtic, folk, contemporary and West African song traditions, each echoing the other in an evolving tale of mutual discovery and delight.

In at No.28 is Understudy (Reveal), from acclaimed singer-songwriter and record producer, Boo Hewerdine, his13th solo release in a career that spans over 40 years. A reflection of these “strange times”, both personally and globally, ‘Understudy’ sees Boo in a reflective mood with a fatalistic yet joyful narrative running throughout the lyrics. Written from Boo’s Glasgow home, the album is hugely personal touching on the loss of his father, turning 60 and rediscovering the joy of writing during the pandemic. Many songs are stripped bare and melancholic while some are full rocky excursions with memorable melodies . A beautiful collection of 12 compelling songs.

To Have You Near (Hannah Rarity) is the sophomore album from Scottish singer-songwriter Hannah Rarity, in at No.19. Known for her empathetic interpretations of songs, her new release ushers in a more mature, mellow sound with shades of jazz and blues as well as traditional folk song while showcasing her own self-penned material. Combining contemporary songwriting with some well-loved songs, the album is heartfelt and tender with striking musicianship that elevates  Rarity’s pure, versatile voice. Like the new release from Boo Hewerdine (who has contributed one song), Rarity touches on the zeitgeist of today’s challenging times, emerging as a message of hope and optimism.

In at No.39 is Humans’ Worst Habits (Fika Recordings) from Leeds-based, alt folk four-piece, Crake. Led by enigmatic guitarist-songwriter Rowan Sandle, Crake’s poignant debut album touches on flora, fauna “and the tough stuff”. Armed with her gently cracking, wispy  vocal, Sandle places humanity at the heart of the record.  Whether it’s the sensitivity in which she sings about grief, the intricacy of human nature, queer ecology and our  most base instincts – namely cruelty, passion and love – or  the sincere, pure quality of the songwriting itself, this mesmerising debut is essential and invaluable listening.