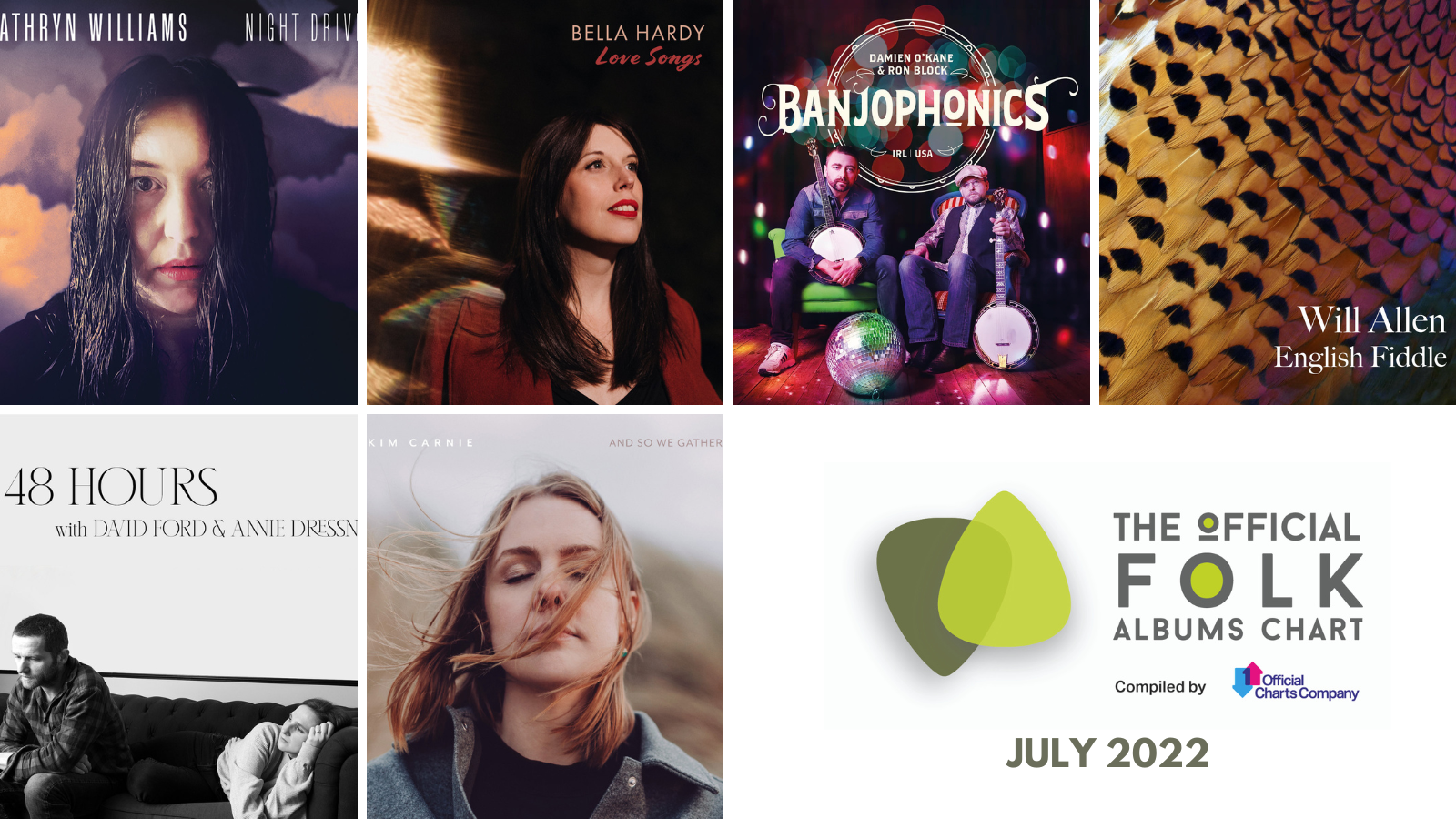 On Tuesday 2 August the Official Charts Company in partnership with English Folk Expo reveal the Top 40 best-selling and most streamed folk albums released in the July reporting period. The chart is first announced to the public at 7pm GMT as part of the  Official Folk Albums Chart Show presented by Folk on Foot via their YouTube channel.

Six new releases have entered the Top 40 chart this month.

Straight in at No.2 is Night Drives (One Little Independent), the 14th studio recording from Liverpool-born singer-songwriter, novelist and painter Kathryn Williams. Journeying from leftfield contemporary pop to soft, folk-inspired acoustics, Williams explores a variety of fresh ideas inspired by her collaborations with a host of songwriters. Tracks journey from the bold and dynamic to slowly unravelling stories backed by elated, emotive string pieces exploring a more filmic sound. Elsewhere songs lean more towards folk-inspired sounds. Playing like a road-trip through her styles and influences, songs are self-aware featuring Kathryn’s rich and honest song writing and distinctive voice backed with beautifully arranged compositions.

In at No.8 is Love Songs (Noe), the 10th solo recording from contemporary ‘fiddle singer’ and songwriter, Bella Hardy. Featuring seven folk songs and four self-penned compositions, the album sees Hardyrediscovering some of the traditional ballads she’s known all her life.  With guitar, piano and clarinet this exquisitely understated album places Hardy’s soaring, beguiling storytelling voice in the room with you. Old and new stories of shoemakers sent to sea; sweethearts waved off to war and penniless lovers scorned by parents are told with precision, sensitivity, wisdom and the deft musicianship for which she’s renowned, honed by 15-years at the forefront of English folk music.

The spectacular partnership of two of the greatest exponents of the banjo – Coleraine’s Damien O’Kane and California’s Ron Block -is revived for their second release, Banjophonics (Pure) sliding into the Top 10 at No.10.  Putting the Irish tenor banjo and five-string bluegrass banjo centre stage, the pair fuse their differing styles to captivating effect. The album is a joyous, life-affirming joust; fast, frenetic fireworks punctuated by more reflective melodies and is an exuberant antidote to these troubled times. The collection of accomplished originals and punchy covers also offers two songs where O’Kane and Block showcase their contrasting voices. A family theme beats strongly through the album in a wonderful celebration of the incredible scope of the banjo.

Based in England’s south-east, supremely talented Will Allen has been playing traditional dance on button accordion since he was a teenager. Since then, he has become an acclaimed fiddle player as well as playing the mandolin, 4 and 5 string banjo and bouzouki. English Fiddle (Will Allen) is Allen’s debut solo album landing in the chart at No.18. Taken from his extensive repertoire, the collection of traditional English fiddle tunes is performed in his own unique style, showcasing his great sense of rhythm and sensitivity. Accompanied by Rowan Piggott on cittern, the 11-tracks highlight the beauty and richness of England’s fiddle tradition and is Allen’s call to arms to other English fiddle players to record this music and share it with the world.

Kent-born guitarist and songwriter David Ford and New York-born singer-songwriter Annie Dressner began their musical alliance only 7 months ago, yet listening to the blend of their voices and timeless song writing, you’d be forgiven for thinking they had been making music together forever. 48 Hours (Anne R Dressner) is their sublime six-song debut, landing at No. 23. Named in honour of the two-day burst of creativity during which most of the material was written, the album demonstrates their shared love of sweet harmony singing and brutally emotive song writing. Showcasing the pair’s heartfelt writing style and Dressner’s gentle, fragile voice, the album is a strikingly intimate, tender, moving listen.

Taking the No.40 slot is one of the scenes most sought-after Gaelic singers, Kim Carnie with her impressive debut release, And So We Gather (Carn). The album sees Kim lovingly resurrect five old Gaelic songs alongside five self-penned songs that showcase her natural gift for heartfelt storytelling.  Kim’s inimitable, velvety vocals and producer Donald Shaw’s piano and harmonium are accompanied by a star-studded line up of over 30 acclaimed artists including, amongst others,  vocalists Julie Fowlis, Karen Matheson and Megan Henderson. A sonically rich breadth of instrumentation that includes West Africa’s kora and the Scottish Session Orchestra clearly indicates the album’s ambition.  It is set to be one of the largest-scale solo Gaelic records of a generation.