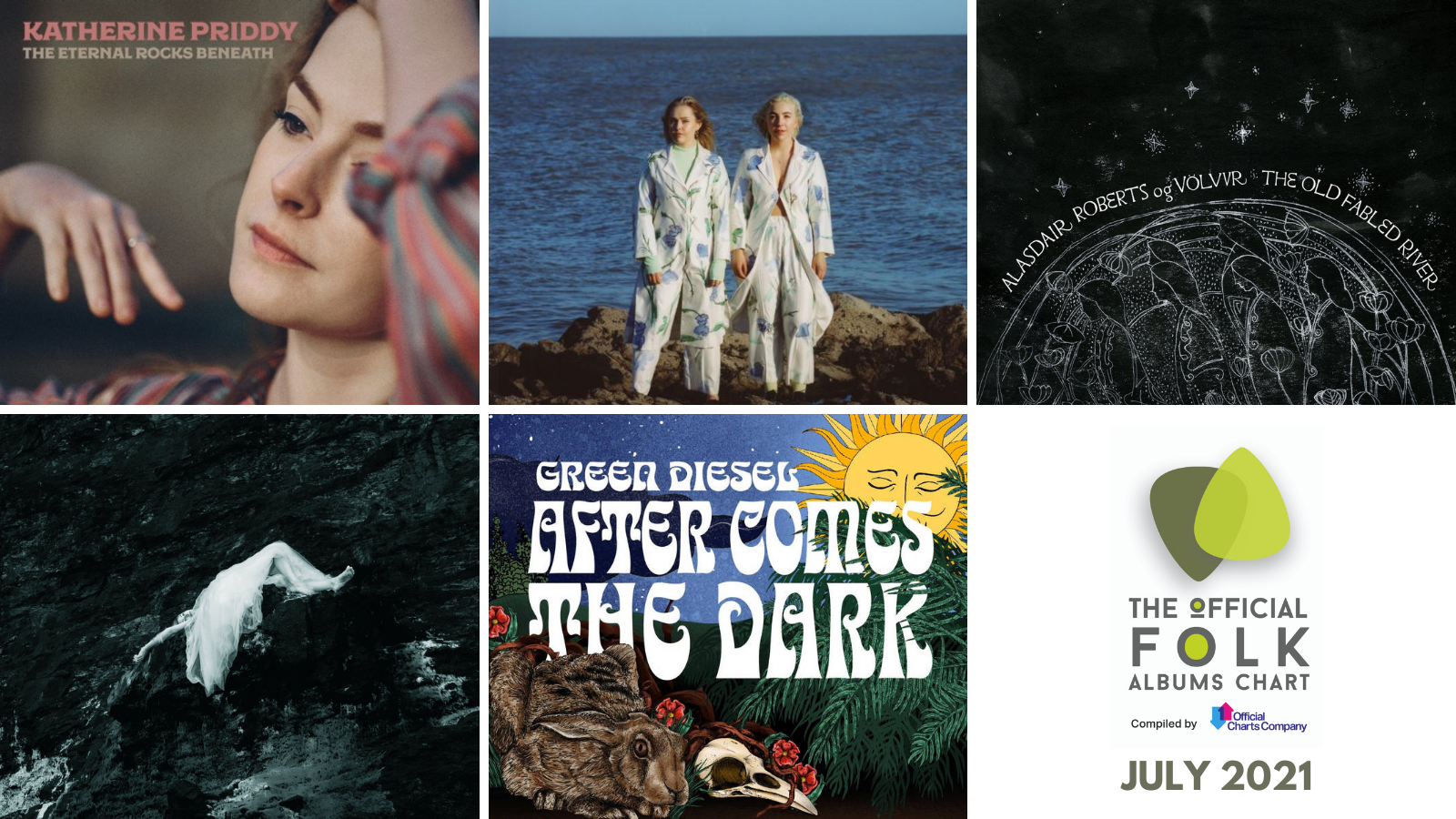 Today, the Official Charts Company in partnership with English Folk Expo reveal the Top 40 best-selling and most streamed folk albums released in the JULY reporting period.

The chart is announced to the public at 7pm BST as part of the Official Folk Albums Chart Show presented by Folk on Foot via their YouTube channel and podcast feed.

The Four brand new recordings entering this month’s chart sees atmosfolk, experimental-folk, folk-rock and psyche-folk combine with singer-songwriter, folk-funk, Folk-Americana and more, to demonstrate perfectly the depth and breadth of the genre.

Katherine Priddy‘s ‘The Eternal Rocks Beneath’ jumps from No.2 to take the top spot knocking folk stalwarts, Bellowhead from the No.1 position.

The highest new entry is ‘Where I Should End’ (IE Too), from Northern Ireland ‘atmosfolk’ duo, Saint Sister, jumping straight in at No.5. Hailing from Belfast and Derry respectively, Morgana MacIntyre, an astute songwriter and lyricist, and Gemma Doherty, a multi-instrumentalist with a penchant for experimentation, met in Dublin and released their first EP in 2015 establishing them as one of Ireland’s most exciting new bands. Between Morgan’s lyrics and Gemma’s soundscapes, their voices meet right in the middle. Built around mesmerising close-knit vocal harmonies, electro-acoustic harp, layered synths, drum machines, piano and strings (performed by Crash Ensemble) alongside Lisa Hannigan guesting on one track, ‘Where I Should End’ reveals an elevated sound for Saint Sister.

Alasdair Roberts has collaborated widely with many different musicians and disciplines throughout his career. His latest is the result of an invitation from Norwegian fiddler, Hans Kjorstad to travel to Oslo and join Scandinavian experimental folk collective, Völvur. Two years later Alasdair Roberts og Völvur release ‘The Old Fabled River’ (Drag City), landing at No.17. In Roberts’ alchemical world, it’s the ideal meeting of minds and cultures. Fiddle, different vocal styles and musical disciplines from free jazz and folk, fuse with experimental clarinet, saxophone and metallic bowed guitar drones to fashion baroque folk arrangements. The album combines original material from both Roberts and Völvur alongside traditional songs, sung in English by Roberts and Norwegian spiritual pieces – sung by Marthe Lea. An extraordinary collection of adventurous, experimental folk.

After a hiatus of over eight years, Cambridge-based post-folk collective Fuzzy Lights release ‘Burials’ (Meadows) in at No.25. For this album, their sound has been stripped back to its component parts, deconstructed and rebuilt. From its bedrock of folk-rock, it’s built up through multiple layers; from thrashing, distorted guitars and orchestral chaos to calm and smooth textural flows, their sound has been cultivated into something new and fresh. Rachel Watkin’s ethereal, barely-there voice underpins her most intimate lyrics. Personal experiences, such as her suffering and loss from a miscarriage, have been distilled into each piece, her translucent vocals often betraying the content of the songs themselves; the rallying cry of women’s rights, and the climate crisis. A raw and powerful listen.

Kent based Green Diesel take their inspiration from English folklore and the classic folk-rock sound of artists such as Fairport Convention. Blending violin, mandolin, dulcimer and accordion with electric guitars and drums, their sound is born from a love of traditional English music. ‘After Comes The Dark’ (Talking Elephant) lands at No.37. With a new line-up, the recording features a major development of the band’s sound. Experimenting with different sound textures and extra layers of rich vocal harmonies, progressive and psychedelic elements have come to the fore, with the influences of prog rock ‘Canterbury Sound’ bands such as Caravan, making their mark. It’s a sound that Greg Ireland, the band’s vocalist and multi-instrumentalist calls ‘folk in technicolor’. This is also the first recording where each band member has written at least one of the album’s tracks, with themes explored including rebirth, the natural world and folklore.