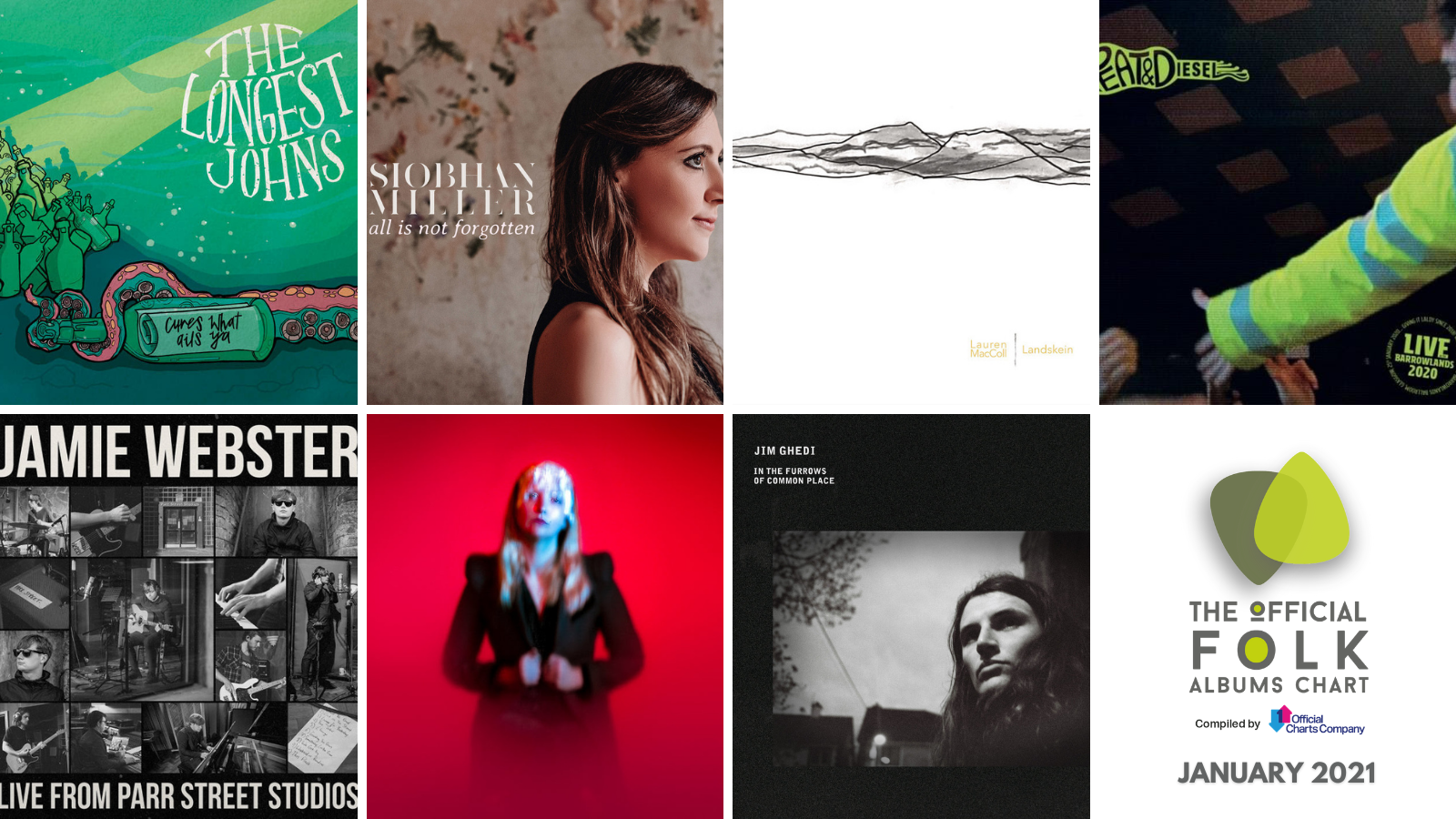 Today, the Official Charts Company in partnership with English Folk Expo reveal the Top 40 best-selling and most streamed folk albums released in the JANUARY reporting period.

6 new releases have entered the Top 40 chart, all being brand new recordings.

January’s chart has a decidedly Scottish focus reflecting both Burns Night and Celtic Connections, Glasgow’s annual folk, roots and world music festival. Celtic Connections was delivered digitally for the first time, but its impact was felt across the chart, both from programmed artists entering for the first time, or artists such as Karine Polwart whose performance possibly accounted for her 2019 release, jumping 8 places reversing the downward trend. Similarly, Skerryvore’s July 2020 release  re-entered the chart at No. 18.

But first, Bristol-based a capella folk band, The Longest Johns have found themselves at the forefront of a 2021 sea shanty revival. A sing-along to their version of the 19th century whaling song, ‘Wellerman’ and a subsequent rendition from a Scottish postie attracted millions of views on TikTok, sparking a worldwide sea shanty trend. ‘Wellerman’, originally released in 2018, sailed into the mainstream Singles Chart at No.37, with Spotify reporting a 7,000% increase in streams. Meanwhile, The Longest John’s Cures What Ails Ya (Longest Johns Records), released in June 2020, leaped back up the chart to No. 6 from last month’s 26 position. Renowned for their irreverent, rousing sea songs, the album’s jaunty melodies, rich harmonising vocals and hearty choruses are the perfect antidote for the Covid lockdown.

To Scotland. Stornoway trio Peat & Diesel release Live At Barrowlands 2020 (Wee Studio Records) entering the chart at No. 9. Pete & Diesel’s meteoric rise following their posts across social media lies with their foot-stomping songs, rasping vocals, driving guitar and accordion with a wicked sense of humour. Featuring live versions of songs from ‘Uptown Fank’ (2019) and ‘Light my Byre’ (2020), ‘Live From Barrowland’s – the iconic Glasgow venue they sold out in one day – combines songs  composed by the band plus amusing takes of a few well-known tunes. Dubbed ‘croft rock’, they sing about of daily life in the Western Isles, wild parties on the moors, crofting, and eating herring!

From tongue-in-cheek folk-punk to virtuoso Scottish fiddles.  Lauren MacColl, one of Scotland’s finest fiddle players saw her album, Landskein (Make Believe) originally released in August 2020, enter the charts at No.38 following her appearance at Celtic Connections this month.  Her performances are emotive, engaging and informed by an equal helping of tradition and technique. Recorded in a hall in the hills high above Loch Ness – ‘Landskein’ is composed almost entirely solo traditional airs and distils the finest qualities of Highland music, at times haunting, enlivening and enchanting.

To The Awe (Shadowside Records) is the bold new album from Scottish singer, harpist Rachel Newton, in at No.28.  On this album, Newton has placed women at the centre of its narrative at various stages of life, often marking a coming of age and an acquisition of power. Specialising in interpreting traditional folk songs in both English and Gaelic, as well as writing and arranging her own music, Rachel draws on poems and ballads that are hundreds of years old, working them into her contemporary compositional style to create a rich sound that is ambitious, original and unique.

Though Sheffield-born, guitarist-composer, Jim Ghedi chose tohuddle away with his bandon Great Bernera, a small island in the Outer Hebrides to record his second album, In The Furrow Of Common Place (Basin Rock) that lands at No 27. His alternative, idiosyncratic take on folk has often been instrumental, yet on his new album he plunges deeper inside himself to offer more of his voice to accompany his profoundly unique and moving compositions. There is a socio-political backdrop to the record with Jim exploring contemporary issues with links to the past; environmental destruction, working class poverty and austerity measures. Intricate, yet deft guitar playing with sweeping violins, overlapping harmonies, gentle percussion and fiddle workouts combine to create a passionate, atmospheric and magical recording that sounds distinctly contemporary with a touch of traditional flair.

Elsewhere in the chart, Live At Parr Street Studios (Modern Sky) from previous Folk Chart topper, singer-songwriter, Jamie Webster is straight in at No.2, while his debut album, ‘We Get By’ is right behind at No.3. Jamie sings about football culture, working class life, an overlooked Liverpool and tells a story of our times.

Further exploration on the Sea Shanty

For anyone wishing to comment further on the chart success of sea-songs and shanties, the English Folk Dance & Song Societyprovide excellent (and free) archive and resources that are in-depth, fascinating and sometimes surprising. As an example, see here for the influence of black sailors on sea shanties. www.efdss.org

Today (1st February), English Folk Expo launch an Open Call for artists to take part in its new Showcase programme. As the global music industry reboots in 202, EFEx continue to ensure that the best in English folk, roots and acoustic music is supported and showcased.  They are inviting artists and bands (based in England) to apply. 15 selected artists will perform a headline concert, live (depending on social distancing restrictions) and streamed. The recording is made into a ‘virtual showcase’ and becomes part of a programme available to an audience of music industry delegates. Artists should apply here .

Last week, PRS for Music announced plans for a new licence fee for online streamed ticketed concerts at a level that will impact many artists who are beginning to build new revenue streams at a time when they are most in need.  EFEx joined other organisations at expressing their frustration at the implications of the plan by urging PRS for Music to rethink and to open up a sector-wide consultation. EFEx have examined what they know so far based on statements from PRS for Music, other partner organisations and from the discussion at Folk Talk Live | What Next (November 2020, so far, the only public discussion that PRS for Music have entered into). Clear information and further reading can be found Here