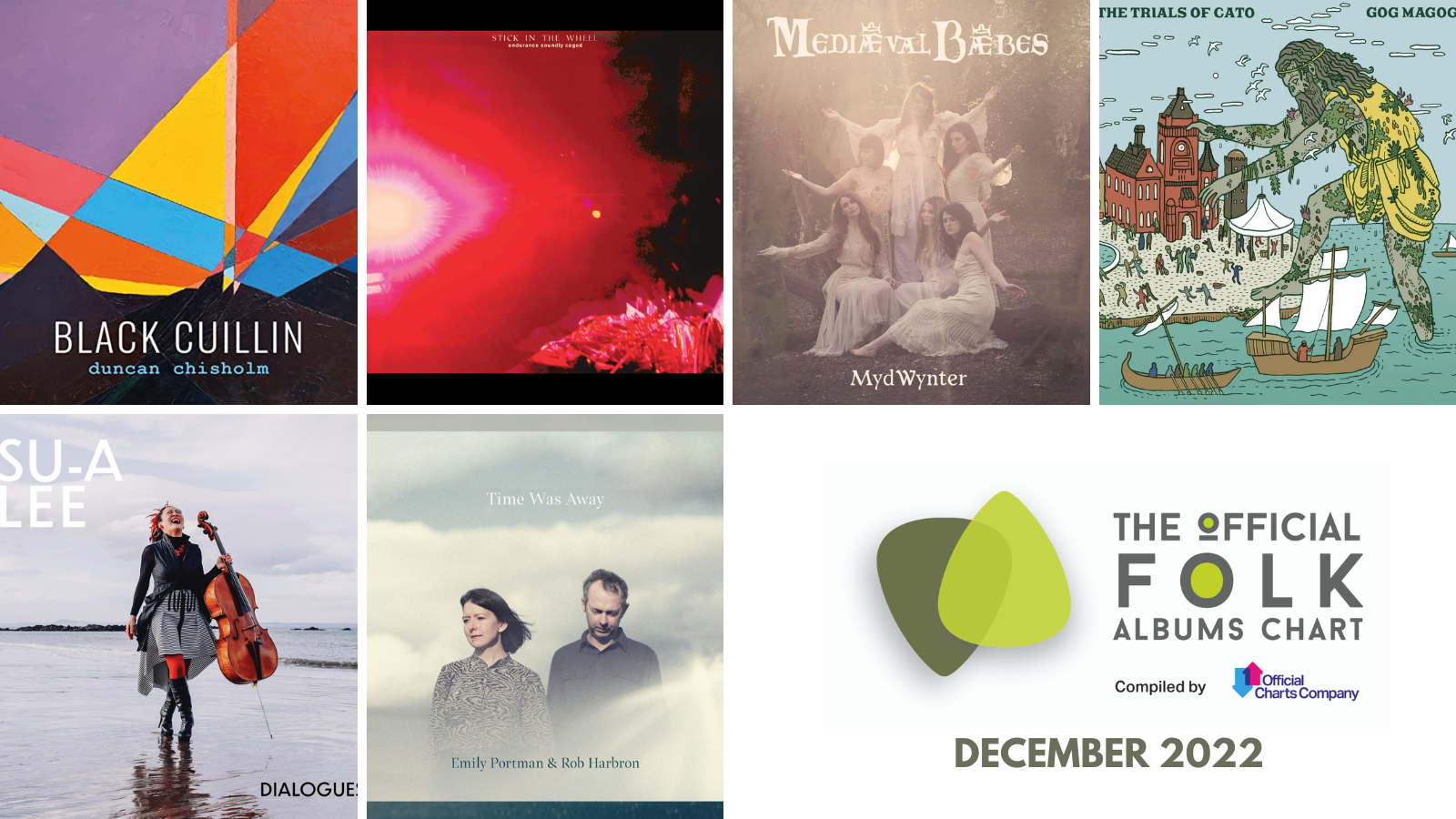 On Tuesday 10 January the Official Charts Company in partnership with English Folk Expo reveal the Top 40 best-selling and most streamed UK folk albums released in the December 2022 reporting period. It is announced to the public at 7pm GMT as part of the  Official Folk Albums Chart Show  presented by Folk on Foot via their YouTube channel.

There are 6 new entries this month which include some inspired collaborations and two debut recordings.

Straight in at No.5 is this month’s highest new entry, Black Cuillin (Copperfish) from one of Scotland’s most recognised and accomplished fiddle players and composers, Duncan Chisholm. Born and raised in the Scottish Highlands, the album’s inspiration came from the mountain wilderness on the Isle of Skye. Bringing statuesque landscapes of sound together, the richly evocative album represents a dream journey over a day and a night to the iconic ridge of The Black Cuillin. It speaks of the fortress of Skye and the redemption and freedom that lie within those dark ramparts. The album is sumptuously layered and awash with dazzling colours, textures and rhythms. This is inventive, 21st Century traditional music which is exhilarating and meltingly beautiful.

New at No.8 is Endurance Soundly Caged (From Here) by trailblazing  London-based folk duo, Stick In The Wheel, an album of fresh new arrangements of six songs that span past releases, recorded live. Their relentless approach to questioning traditional music forms is matched only by the energy with which they play it, so ‘Endurance…’ aims to capture the vital connection and intensity of their live shows.  The album sees a return to their core principles, largely bypassing their recent foray into more experimental sounds.  Featured in the all new, revitalised collection of songs is the familiar pounding energy, shimmering dissonant guitars and vocalist Nicola Kearey’s defiant vocals.

MydWynter (Bellissima) is the new album from vocal ensemble Mediaeval Baebes, landing at No. 9. The collection includes several uplifting seasonal favourites yet their focus is on a darker reminder of the pre-Christian origins of the winter festival. Featuring wild acapella arrangements and original compositions for arrangements of ancient texts, including the earliest of Christmas hymns, the album blurs lines between the old and the new. The Baebes unique choral style features a beguiling mixture of ancient music and modern arrangements, replete with a dazzling array of period instrumentation.

Known for their broad spectrum of folk styles, The Trials Of Cato release their second album, Gog Magog (The Trails of Cato) in at No.10.  Named after the mythical giant of Arthurian legend and the Cambridgeshire hilltop where the new album was birthed, the trio fuse their Celtic instrumental interplay and Arabic sounds with striking new compositions.  Not only does new member Polly Bolton bring skill on  multiple instruments, but also brings a distinctive voice to the collection of 12 adventurous tracks that range from neo-traditional interpretations of Welsh language poetry to current-day plague songs as well as explorations of the outer edges of folktronica and trad-jazz.

The cello is currently undergoing a revival in the folk world, thanks in part, to the celebrated South Korea-born cellist and Scotland resident Su-A Lee who releases her debut album Dialogues (Su-A Lee). Landing at No.33 it highlights the distinctive sound of her non-classical career. The album is a series of intimate duos with 15 of her favourite folk musicians with each choosing a tune or song that celebrates their connection with Su-a over the years. Combining original compositions and fresh arrangements of traditional tunes, the album is as extensive as it is diverse. Running for a full 75 minutes, tracks – whose collaborators include Julie Fowlis, Donald Shaw, Phil Cunningham and Karine Polwart – are thoughtfully grouped into three theatre acts. Aside from exploring the role of cello in folk music, this album sees Su-a finding her own, unique voice and bringing it to the fore.

At No.37 is Time Was Away (Robrec) from Emily Portman & Rob Harbron, two of the finest performers on the English folk scene in an inspired new collaboration.  Eight English folk songs and two 20th Century poems set to music combine in this unapologetically dark and yet quietly optimistic album. Themes of reliance and resistance in the face of hard times open a window into our past with tales that still resonate in contemporary Britain. Emily’s crystalline vocals and distinctive banjo-playing are complimented by Rob’s virtuosic musicianship as they delve into English traditional music to present an absorbing, powerful masterwork that deftly treads the tightrope between contemporary and timeless.