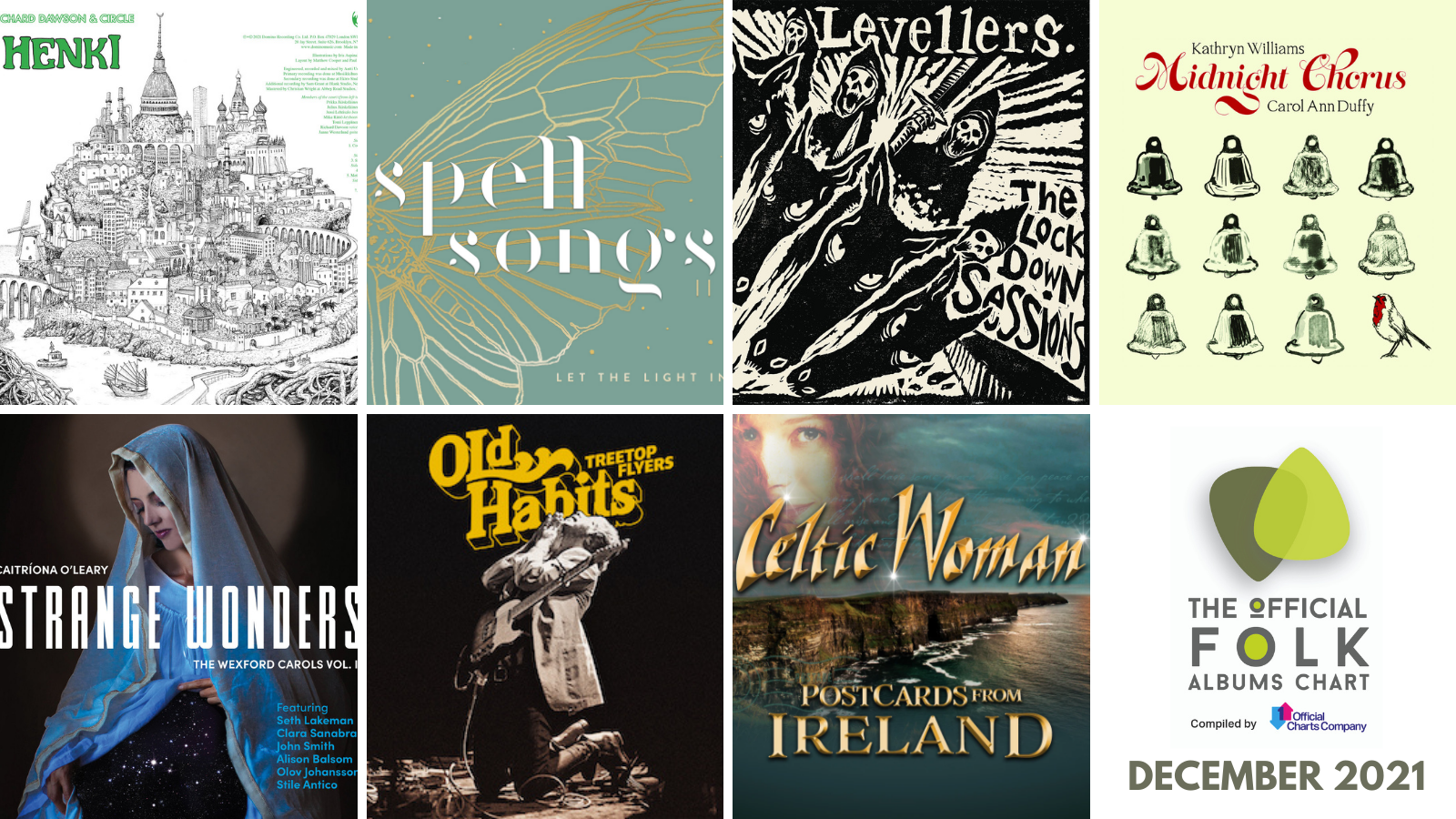 On Tuesday 11 January, the Official Charts Company in partnership with English Folk Expo reveal the Top 40 best-selling and most streamed folk albums released in the DECEMBER reporting period. The chart is first announced to the public at 7pm GMT as part of the Official Folk Albums Chart Show presented by Folk on Foot via their YouTube channel.

There are 7 new entrants this month with a brand-new Number 1. Two releases celebrate the Christmas season with extraordinary recordings that go far beyond the usual Christmas fare, plus two very exciting new collaborations. There are no fewer than 6 re-entries, perhaps indicating that gifting music at Christmas is alive and well.

Straight in at No.1 is Henki (Weird World), the collaborative recording from Geordie singer-guitarist, Richard Dawson withexperimental Finnish rock band, Circle. Known for his boundary-pushing, eccentric style, Dawson is true to form. Songs shine a light on special plants and botanists throughout history. Tracks are long, unfolding, imaginative and lyrical with Dawson’s distinctive voice matching the musical virtuosity of the band. Clashing guitars drive a powerfully charged collection of 7 truly epic songs making it, quite possibly, the greatest flora-themed, hypno-folk-metal recording you’ll hear this year!

Following at No.2 is Spell Songs II: Let the Light In (Quercus), the musical companion to the acclaimed books ‘The Lost Words’ and ‘The Lost Spells’ by renowned author Robert Macfarlane and award-winning artist Jackie Morris that give voice and presence to birds, animals and flora. The folk heavyweight ensemble of Karine Polwart, Julie Fowlis, Seckou Keita, Kris Drever, Rachel Newton, Beth Porter and Jim Molyneux bring a wealth of vocal talent and multi-instrumental virtuosity embracing a diverse range of instruments with musical influences spanning from Orkney to Senegal. A truly collaborative work combining folk, world, experimental, alt-country, classical and traditional elements interwoven with spoken voice and sounds of nature to create a powerful and magical listening experience.

As testament to their enduring popularity and committed fanbase, The Levellers 2020 release ‘Peace’ has maintained a position in the chart since its inception. Yet due to Covid restrictions, the band have been unable to tour the album, so they came together in the studio to record a set, as it happened, live. The Lockdown Sessions (On The Fiddle) in at No.6 is a collection of electrifying songs taken from ‘Peace’ alongside old favourites. The excitement of being back together is palpable – old friends doing what they do best. Having a riot.

Landing at No.16 is the second new entry that features an exciting collaboration, this time, the meeting of two gifted writers; Mercury-nominated, folk inspired singer-songwriter, Kathryn Williams and celebrated poet laureate, Dame Carol Ann Duffy. Midnight Chorus (One Little Independent), is an album ruminating on the Christmas season with obvious affection and a joyous, honest tenderness which never shies away from the darkness beyond the light. From uplifting festive celebrations to more tender songs, the album’s twelve emotive tales combine beautifully heart-warming, classic instrumentation, dexterous musicality and layered harmonies in an album of folk-chamber-pop.

December’s second new release celebrating the festive season is Strange Wonders, The Wexford Carols, Vol. II (Heresy Records) from singer Caitríona O’Leary. In at No.23, the collection of 11 carols represents the astonishingly rich, yet rare, tradition of Irish Christmas music and features a cast of folk, classical and traditional music luminaries that include Seth Lakeman, and John Smith alongside a choir and an array of acclaimed instrumentalists. Astonishingly, the collection stems from O’Leary’s investigation into lost tunes born from writings of 1684 and 1728, others of which form a tradition of carol singing in County Wexford. Sung beautifully, this deeply moving collection focuses on the spiritual and mystical aspects of the Christmas story.

Global music sensation Celtic Woman take the No.26 slot with Postcards from Ireland (Manhattan), a collection of songs that celebrate the rich musical and cultural heritage of the Emerald Isle while reflecting the vibrant spirit of modern Ireland. Known for their angelic voices, breath-taking harmonies and instrumental virtuosity the album reflects Celtic Woman’s fresh fusion of traditional Irish music and contemporary songcraft. The album also includes a collaboration with The Longest John’s on a version of Richard Thompson’s Beeswing.

In at No.27 is Old Habits from London-based six-piece, Treetop Flyers. Where their previous 3 Americana-shaded releases featured a sixties Californian sound, their fourth is a collection of rootsy, rocking tracks with an invigorating mix of classic British rock’n’roll, Celtic soul and country blues. At the bands helm is big-melody frontman, singer, songwriter and guitarist, Reid Morrison whose aim was to present their British take on rock’n’roll. His compelling soulful rasp can be heard across songs that reflect the stage in life the band find themselves; a little bit older and a little more reflective.