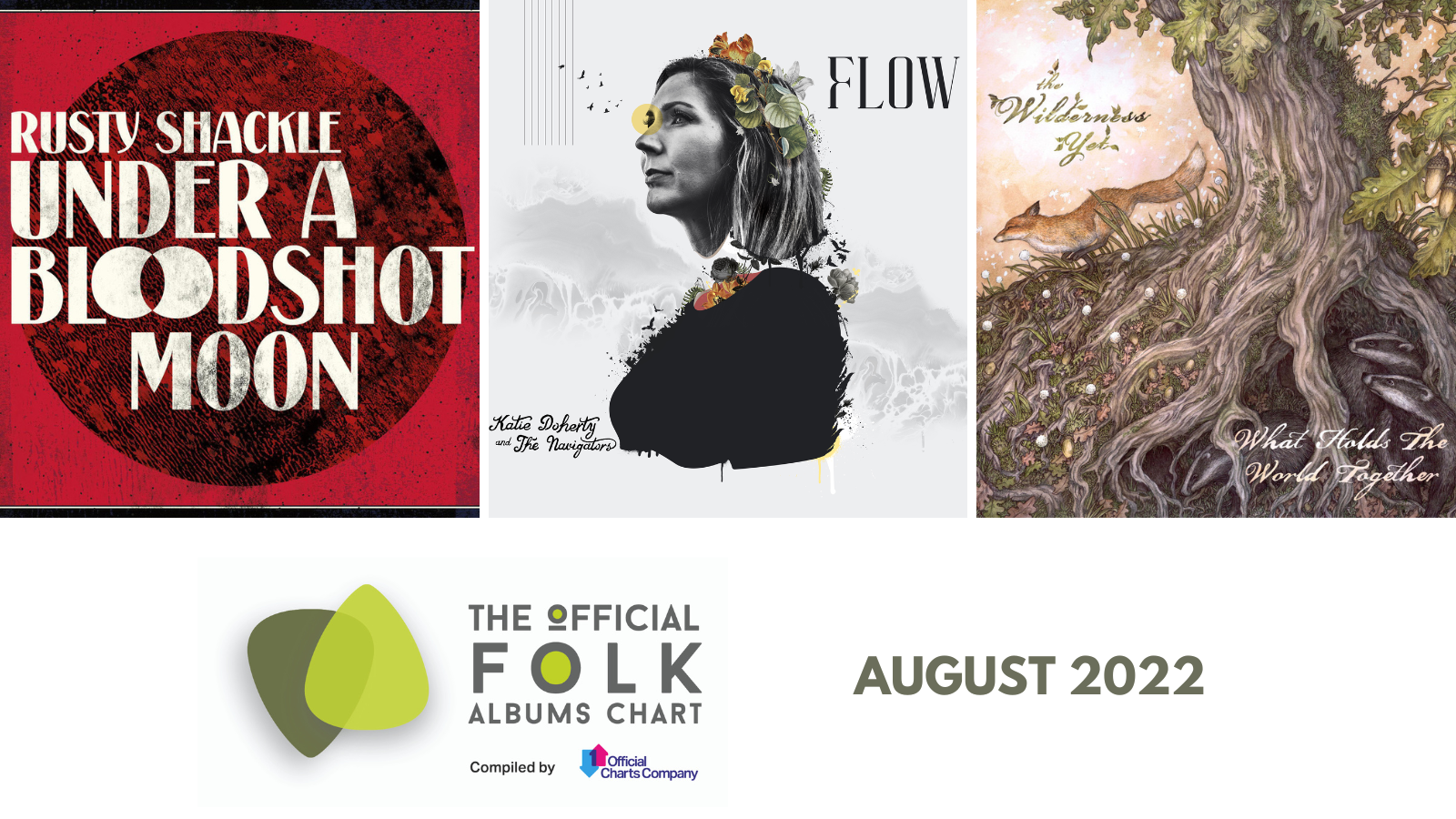 On Tuesday 6 September the Official Charts Company in partnership with English Folk Expo reveal the Top 40 best-selling and most streamed folk albums released in the August reporting period in the UK. The chart is first announced to the public at 7pm GMT as part of the  Official Folk Albums Chart Show  presented by Folk on Foot via their YouTube channel.

In what is traditionally a quiet month for new releases, the August Top 40 chart sees 3 new releases.

Firstly, a belated congratulations to Jessie Buckley and Bernard Butler whose album ‘For All Our Days That Tear The Heart’ has been shortlisted for this year’s Mercury Music Prize.  The magnificent album  went straight to No.1 in the Folk Albums Chart last month, where it resides in August.

Straight in at No.2 is Under A Bloodshot Moon (Get Folked) from Welsh indie-roots six-piece band, Rusty Shackle. Written and recorded over one weekend in an old dairy barn having spent the covid years apart, songs fell out in a flurry of pent-up emotion and musical synergy. Brandishing their distinct folk-roots sound and armed with an electrifying mix of rampant fiddle, slick guitar and banjo hooks, the band delve deeper into melodies of Celtic music and even elements of classic rock presenting a wide-ranging collection of folk-rock songs peppered with storytelling and heartfelt emotion.  The album is full of hope and optimism, documenting a time when a band of friends came together and deepened their connections through the unending joy of music.

Flow (Hudson) is the latest release from Newcastle-based songwriter Katie Doherty & The Navigators. At No.30, the album is an ambitious project driven by Katie’s desire to connect with her audiences in new and meaningful ways, particularly in these pandemic years. Exploring the concept of ‘creative flow’, Katie worked with local community groups entrusted with early demos to encourage artistic responses to their music – this ranged from dance, photography and painting which in turn informed the final recording. The resulting songs paint sweeping pictures and intricate portraits of NHS workers, teachers, artists, parents and more. The dynamic, powerful songs are visceral in their story-telling with Katie’s distinctive voice and music brimming with texture. Songs are uplifting, exuding heart, warmth and melody.

Landing at No.33 is What Holds The World Together (Scribe), the new recording from Sheffield-based trio, The Wilderness Yet.  At a time of disconnection from each other and the environment, the album is grounded in our relationship with the natural world, with songs exploring the connection between the future of our planet and mankind. Though steeped in traditional music, all three musicians have unique creative voices – the charismatic vocals of Rosie Hodgson, the fine fiddling of Rowan Piggott and the deft guitar and flute playing of Philippe Barnes –  with each contributing  original material to the mix. From brand-new songs that effortlessly take on the traditional mantle, to fresh takes on songs from the English and Irish folk canon, the album is a rich aural tapestry delivered with dazzling musicianship.