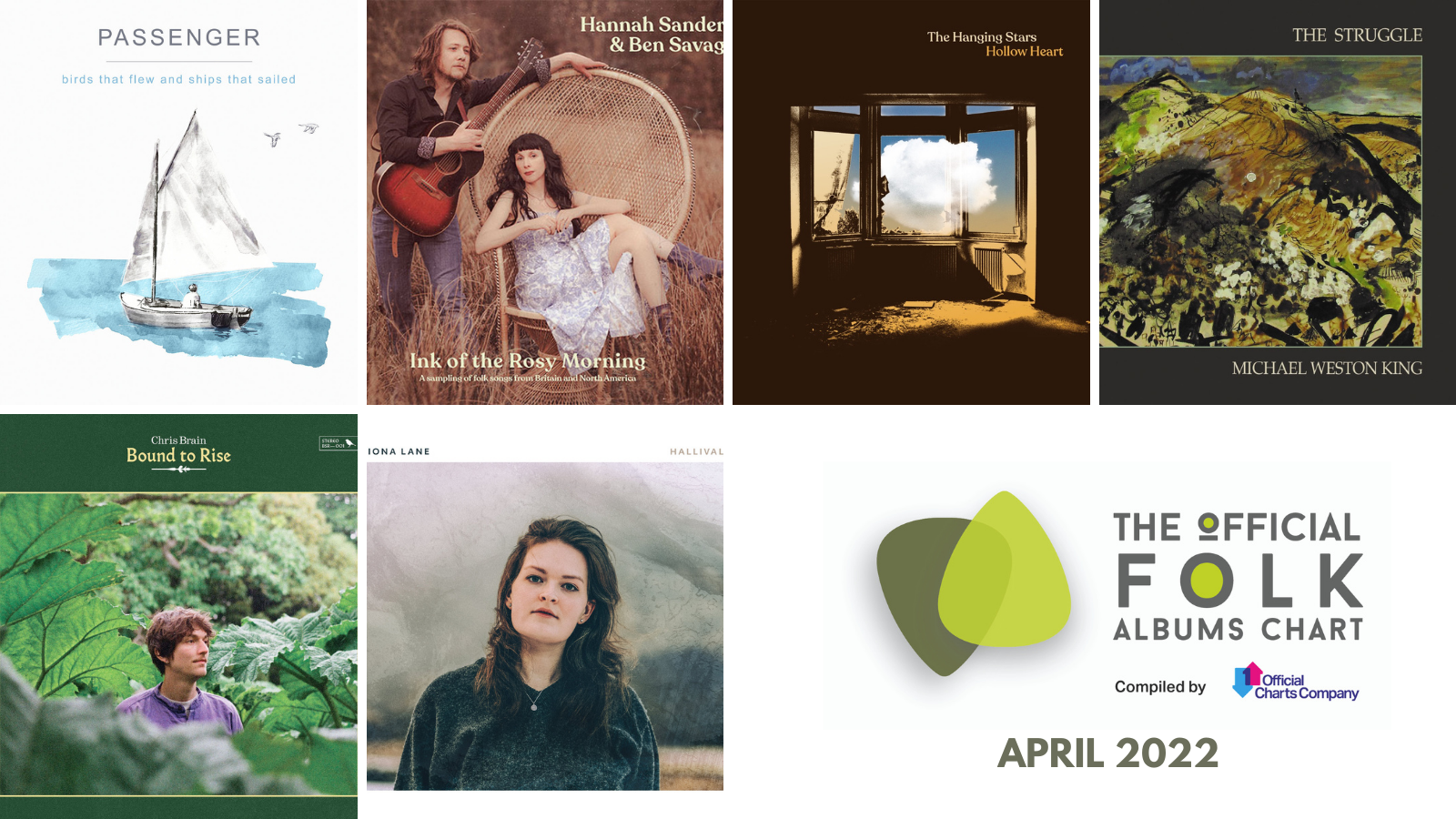 On Tuesday 3 May the Official Charts Company in partnership with English Folk Expo reveal the Top 40 best-selling and most streamed folk albums released in the APRIL reporting period.  The chart is first announced to the public at 7pm GMT as part of the  Official Folk Albums Chart Show  presented by Folk on Foot via their YouTube channel.

Six new releases have entered the Top 40 chart this month.

Birds That Flew And Ships That Sailed (Black Crow) is the brand-new No.1 from Brighton-based singer-songwriter musician, Passenger, aka Mike Rosenberg. Although Rosenberg released two albums with folk-rock band, Passenger in 2007 and 2009, it was his hit single ‘Let Her Go’ and an album self -funded by busking that catapulted him to stardom in 2012. This is his 14th album, released out of the blue, entirely independently. Banjo, guitars, strings and occasional horns are accompanied by his  distinctive, intimate voice, clever wordplay and heartfelt lyrics that speak of human impermanence and the passing of time.  A beautiful and resonate album.

At No.3 is Ink of the Rosy Morning (Topic) from Cambridge folk duo, Hannah Sanders & Ben Savage. The album was recorded in a quiet room, just the two of them, nothing prepared, a few mics, a bottle of wine and a bunch of “great old songs” the pair have known for a long time. A touch of Americana, yet quintessentially English, their traditional yet contemporary style is playful and instinctive. Hannah has a voice of disarming purity; harmonies are exquisite and songs dreamy. Subtitled ‘A Sampling of Folk Songs from Britain and North America’, songs are played in true Sanders/Savage fashion, with unique sensitivity, and panache with the natural chemistry between them making this an undeniably intimate record.

Masters of blissful psychedelic folk and harmony-laden cosmic country, Hanging Stars release their fourth album, Hollow Heart (Loose Music) entering the Top 10 at No.11. Favouring sound as much as song, the London five-piece recorded the album at Edwyn Collins Scottish studio resulting in a more sonically varied and contemporary recording. Throughout, the vocal arrangements amaze and the breadth of instrumental exploration inspires awe. Songwriting is intricate and the captivating meld of swirling electric and pedal steel guitars with dreamy vocals exudes the warm, rootsy psychedelia that the band are renowned for.  This is the band’s most assured collection of songs to date.

Landing at No.16, The Struggle (Cherry Red) is singer-songwriter Michael Weston King’s first studio album in 10 years in an almost 30-year musical career on the roots music scene.  Drawing inspiration from songwriters of the late 60’s and early 70’s such as Mickey Newbury, Dan Penn, John Prine, and early Van Morrison, King skillfully fuses his love of country music with a distinctive political edge to produce an album uniquely his own.  While this collection of new songs still has a ring of country soul about them, they have taken on a folkier, more earthy sound. The sound is lush and atmospheric while songs are compassionate and thought-provoking.

Bound to Rise (Chris Brain) is the debut album from Leeds-based, Yorkshire-born Alt-folk artist Chris Brain entering the chart at No.22  Recorded on analogue tape, the album captures the shoulder-to-shoulder warmth of a live setting through 10 live performances.  Firmly rooted in place, the album is an enthralling meditation on nature, with glimpses of the confessional. Chris explores distinctive finger picking patterns and alternate tunings in his sound, and with the addition of piano and violin, renders a work embedded in folk tradition and the pastoral, with a contemporary resonance.

Hallival (Hudson) is the remarkable debut from Leeds-based folk singer songwriter Iona Lane in at No.36. Fascinated by folklore and legends from across the British Isles, the album is inspired by natural landscapes, scientific discoveries, equality, human relationships and the supernatural, all bound by a strong sense of place and a love of wild settings.  Lane plays guitar and shruti box and is joined by guests that include Lauren MacColl, Rachel Newton and Jenny Sturgeon. Iona’s expressive, charming voice lace a set of well-crafted, imaginative all-original songs that are haunting and sparse. Hallival is informed by the folk tradition but heads  out on its own contemporary journey of exploration.