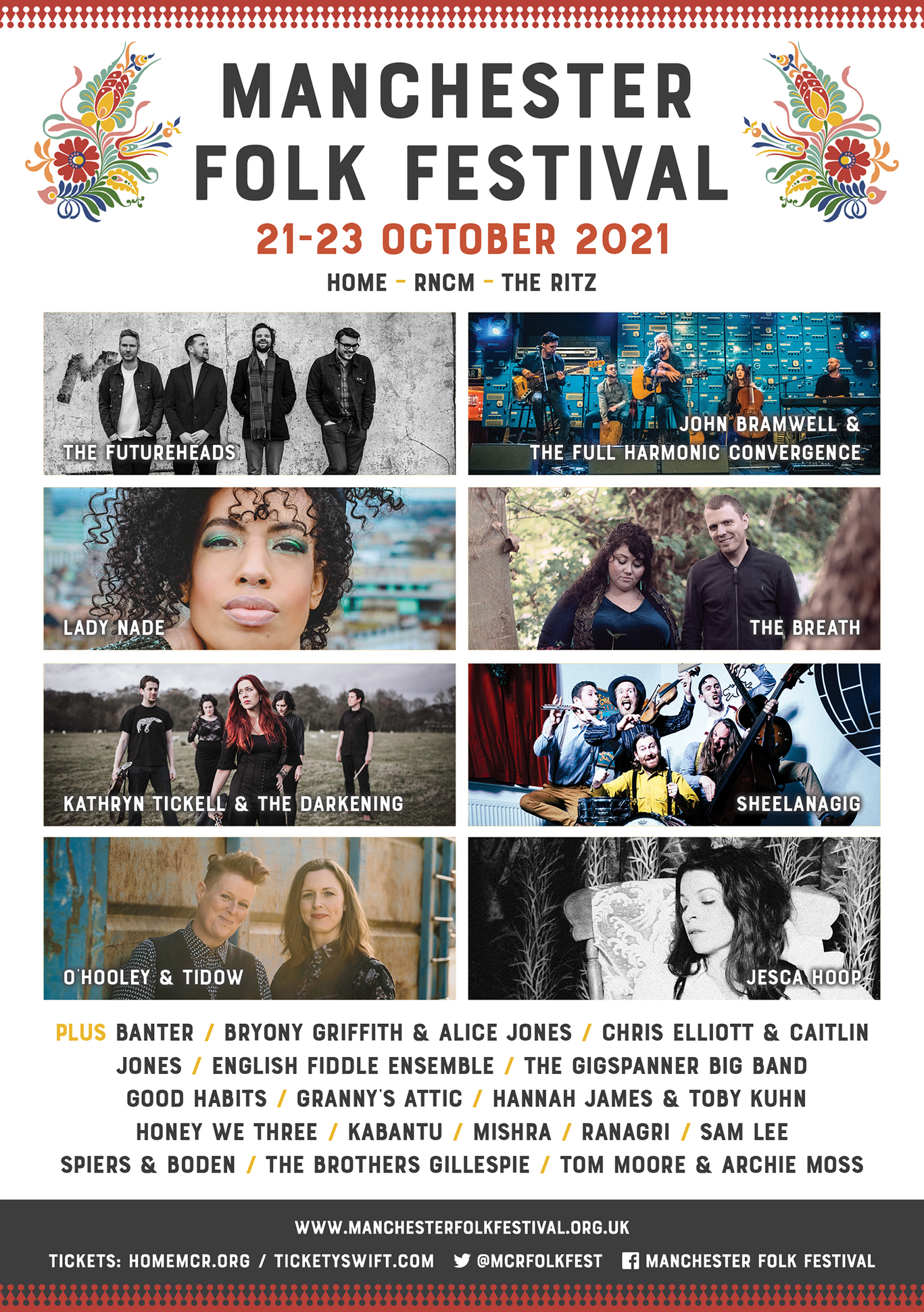 Back in November we announced the first 6 artists for English Folk Expo, 21st – 24th October 2021 and now we’re pleased to announce who will be joining Spiers & Boden, Kathryn Tickell & The Darkening, Jesca Hoop, John Bramwell & The Full Harmonic Convergence, The Gigspanner Big Band and O’Hooley & Tidow at this year’s showcase.

Thursday night sees shows in our hub venue, HOME, from ‘the finest instrumental duo on the traditional scene’ (The Guardian) and Bellowhead frontmen, Spiers & Boden, Manchester’s very own Kabantu – the award-winning Manchester collective whose music bridge countries and cultures, and Lady Nade whose star continues to rise after her ‘Best Song’ nomination at this year’s UK Americana Awards. John Bramwell & The Full Harmonic Convergence – brings songs from his solo repertoire as well as some I am Kloot fan favourites to the 02 Ritz.

On Friday, as well as Kathryn Tickell & The Darkening and Jesca Hoop, we’re thrilled to welcome The Breath – Manchester based Stuart McCallum and Ríoghnach Connolly bring us their contemporary take on alt-folk and are joined by special guests Hannah James and Toby Kuhn whose combination of accordion, cello and voice is described as ‘soulful, original and conversational’. And if ‘foot stomping’ is what you’re looking for then don’t miss Sheelanagig who’ll be putting their groove into traditional and original European Folk music.

Saturday afternoon sees shows from the inventive and technically gifted Gigspanner Big Band (at HOME), and critically acclaimed folk song interpreter and conservationist Sam Lee plays another venue new to us this year – The Royal Northern College of Music (RNCM).

Our event formally known as the ‘Late Night Bar’ has been newly named the ‘Festival Club’. As always, it takes place in the vibrant first-floor restaurant at HOME from 11pm – 1am each night and brings you 3 of the best emerging folk artists.

We’ll be announcing EVEN MORE artists playing at this year’s showcase soon. We can’t wait to see you in Manchester this October.

For more details on all the artists announced so far click here. To register your interest in attending as a delegate click here.