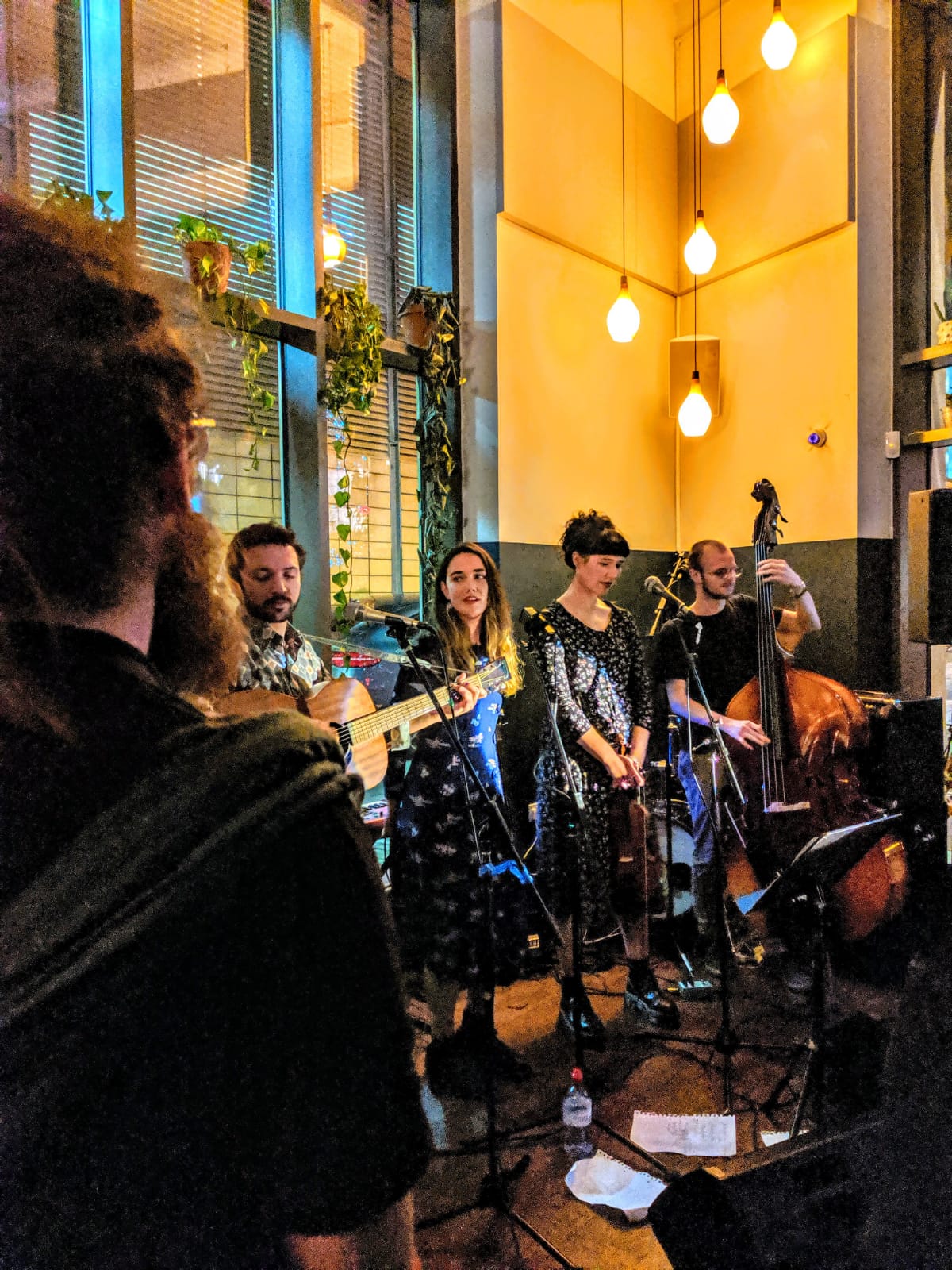 Formerly known as the Late Night Bar, the Festival Club is a much-loved annual feature of the English Folk Expo showcase. Delegates gather together in the vibrant, second-floor restaurant of HOME, where they can catch-up, share their highlights of the day and do business over drinks at the bar.

Then from 11pm – 12.45am (Thursday, Friday & Saturday) delegates are treated to showcases from some of the best emerging folk artists England has to offer – and 2021 is no exception!

This year’s Festival Club artists include:

Northumbrian duo The Brothers Gillespie sing traditional and original songs with lyrical and visionary intensity, rich with sounds of soaring sibling harmony, guitars, flute, fiddle and mandolin. Their songs and performances are animated by a rare energy, both earthy and ethereal, romantic and radical.

Mishra weave a tight web of intricate, Indian-influenced original music that defies definition and has already brought awards recognition since their formation in 2017. Kate Griffin (The Magpies) and Ford Collier (BBC R2 Folk Award nominated The Drystones) draw on their unique base of influences that encompasses folk music of the UK and America, Indian classical music, and soul to create a surprisingly accessible sound that audiences instantly connect to.

Friday night we welcome Chris Elliott and Caitlin Jones – described by Bright Young Folk as ‘experienced storytellers’ who bring ‘timeless quality’ to their music. Chris and Caitlin have been playing music together since they met in 2014. Both proudly from Staffordshire, they bring a mix of traditional and self-penned ballads about place and identity, old and new.

Widely regarded as two of the best players and innovators in traditional folk amongst a precociously gifted generation, Tom Moore & Archie Moss’ finely-crafted arrangements wield a rare potency. Having toured with with some of the biggest and brightest acts in the British folk scene, they reconvene to perform as duo, uniting the deep and resolute harmony of Moss’s accordion with the texture and flow of Moore’s viola.

Folk trio Granny’s Attic who play the tradition with verve, energy and their own inimitable style. All exceptional musicians and fine singers they have toured across the UK and Europe since 2009 and been heralded for their lively performances, delivery and traditional songs selection.

On the Saturday, the final night of the Festival Club, we have a powerful new duo who have emerged from the chaos of the last 12 months – Bryony Griffith & Alice Jones are no strangers to the folk scene. Featuring Fiddle, Harmonium, Tenor Guitar and intricate close harmony vocals, their music celebrates a shared love for community heritage that resonates throughout Yorkshire and beyond, connecting with musical communities the world over.

Manchester based Honey We Three are an Irish folk group headed by Seamus Cowan. Inspired by traditional Irish music and American folk, this captivating blend of intricate vocal harmonies and soothing rhythm of double bass leaves the soul refreshed. Based in Manchester, Honey We Three come together from the port cities of Belfast, Cardiff and Newcastle. A raw combination of three vocalists, double bass and acoustic guitar.

Alt-folk band Ranagri Dónal Rogers (Vocals/ Guitar), Eliza Marshall (Flutes/ Whistles), Ellie Turner (Electric Harp) and Joe Danks (Bodhrán/ Guitar) have already recorded three studio albums and are in the midst of recording their next. Their last release was described as ‘nothing short of magnificent’ by Fatea Magazine.

For full bios and videos of all the artists, as well as the full line-up announced so far click here.