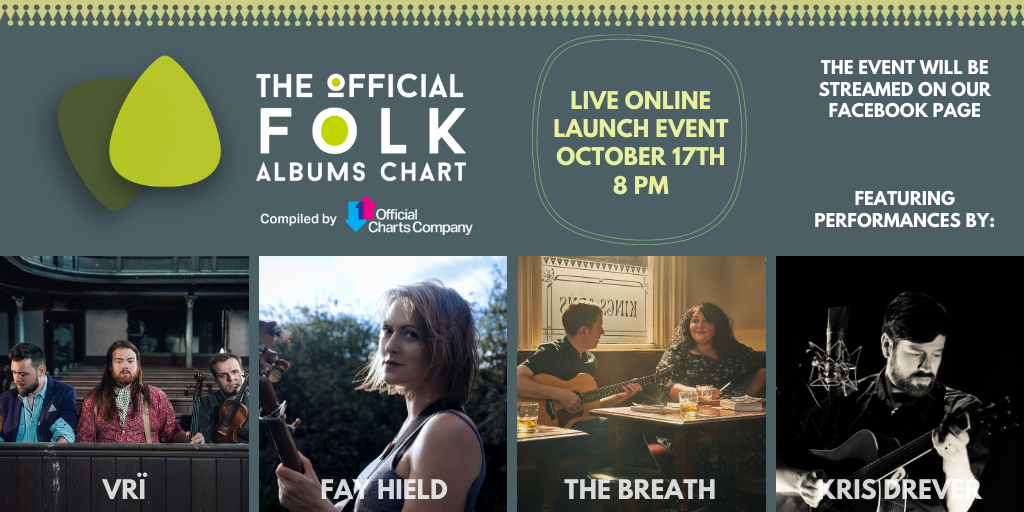 Saturday 17th October, 8pm
Time:
8:00 pm
Cost:
Free Free Live Stream
Get Tickets
Share on:
Join us via live stream from HOME, Manchester at 8pm on Sat 17th Oct, as we celebrate the launch of The Official Folk Albums Chart!
Hosted by Mark Radcliffe, the event features performances from some of the top folk, roots and acoustic artists from the UK and Ireland.
Yorkshire-born Fay Hield, a core member of the English folk scene will delight audiences with her compelling classic folk voice and traditional tales of the otherworld of fairies, ghosts and the animal kingdom, while Scottish singer-songwriter-guitarist Kris Drever, a stalwart of the UK folk and roots scene, presents his mix of traditional and contemporary folk. The Breath – Irish singer/flautist Ríoghnach Connolly and guitarist Stuart McCallum will perform a set of impassioned heartfelt songs presented with jaw-dropping vocals and, Welsh chamber-folk trio VRï, bring a joyous celebration of Welsh identity.
You’ll also be the very first to hear who has made it into the top 40 of the first ever Official Folk Albums Chart, compiled by The Official Charts Company.
This free event will be live streamed via our Facebook page
This event is made possible by support from Showcase Scotland Expo, Greater Manchester Combined Authority and HOME, Manchester.
+ Google Calendar+ iCal Export